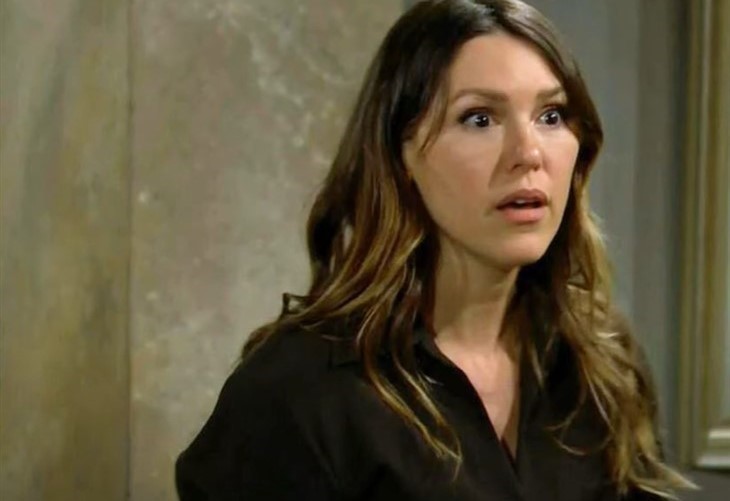 The Young and the Restless spoilers reveal that Chloe Mitchell (Elizabeth Hendrickson) has to navigate a complicated dynamic. Despite her best intentions, Chelsea Lawson (Melissa Claire Egan) and Sally Spectra’s (Courtney Hope) war will only escalate. Chloe is Team Chelsea right now, but that could change in the near future. Will she find a good reason to switch sides?

The Young And The Restless Spoilers – Recruiting Sally Spectra

Y&R spoilers reveal that Chloe was put in charge of the fashion platform at Newman Media. Despite Sally’s history and reputation, Chloe recruited her to join the team. Since then, it’s just been Chloe and Sally in the fashion division of the company. However, Chloe and Adam Newman’s (Mark Grossman) plan from the beginning was to bring Chelsea on board upon her return.

Now that Chelsea is back in Genoa City, she only has one thing on her mind. It’s not work, but putting her broken family back together again. That doesn’t just mean reuniting with her son, Connor Newman (Judah Mackey). Chelsea also wants to reconcile with Adam. The only reason Chelsea is suddenly interested in the fashion platform is that Sally and Adam are too close.

Chelsea has already tried to rattle Sally, but it hasn’t worked. In fact, it just made Sally even more determined to prove her worth as a team member as well as mark her romantic territory. So, Chelsea has come up with another plan, but it requires her contract specifying that she and Chloe are equal partners and Sally is a subordinate.

The Young And The Restless Spoilers – Chloe Mitchell’s Work Fantasy

The Young and the Restless spoilers reveal that Chloe has a fantasy that Chelsea and Sally will eventually get along. Chloe believes that the three of them will make an incredible team and take the fashion industry by storm. However, Chelsea and Sally both have domineering and relentless personalities, so it will never work. In fact, expect this dynamic to get even messier and more complicated. Chelsea isn’t going to give up putting Sally in her place, professionally and romantically. Meanwhile, Sally will do whatever is necessary to win in both business and love.

Chloe has seen Chelse go way too far in her schemes before. It’s what landed her in the psychiatric hospital and she’s lucky there was no prison time. Chelsea even managed to stay in her son’s life. If Chloe sees Chelsea going too far again, she could take drastic action. Of course, Chelsea won’t see Chloe’s perspective – she will only view it as a betrayal.

If Chloe actually switches sides, will Chelsea view her best friend as an enemy? Could Chloe end up regretting her decision? What does this mean for the futures of all three women? We will have to keep watching the CBS soap to see what happens with this storyline.