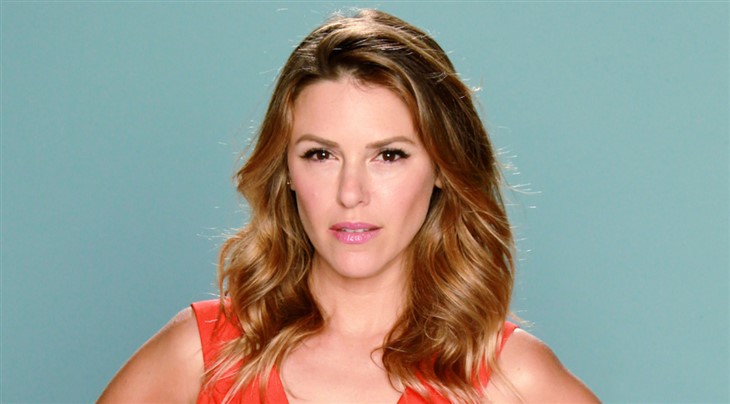 The Young and the Restless comings and goings confirm that actress Elizabeth Hendrickson is back at work. The soap star announced on Instagram that she is back on set to film scenes as Chloe Mitchell. Not only was the soap on hiatus due to the COVID-19 pandemic, but Hendrickson gave birth during the global health crisis and had complications.

The Young And The Restless – Elizabeth Hendrickson Gives Birth

Y&R comings and goings reveal that Hendrickson gave birth in late March and welcomed a daughter, Josephine James. It was quite the experience because Hendrickson went into labor during the coronavirus pandemic. She and her husband, Rob Meder, weren’t sure what to expect in the delivery room due to the increased safety precautions. Then, the baby was able to go home, but the actress had to stay in the hospital due to childbirth complications.

As production on the soap restarted, several cast members went back to work filming new episodes. However, Hendrickson just returned. On Instagram, she posted a brief video clip and announced it was her second day back on set. She wrote,

“The second day back to work at @youngandrestlesscbs Getting ready from home and somehow momming it.”

The Young and the Restless comings and goings reveal that fans are really excited about Hendrickson returning to the set. They mentioned how they are looking forward to seeing Chloe’s new scenes and storylines. Some of the comments include,

So far, Hendrickson has been credited for the role of Chloe in 755 episodes on the CBS soap opera. She made her debut on February 6, 2008, as Chloe Mitchell, a role that she continues to play today.

What do you think of Elizabeth Hendrickson returning to the set? Are you looking forward to seeing new scenes and storylines involving the character of Chloe Mitchell? What would you like to see happen on the CBS soap opera?