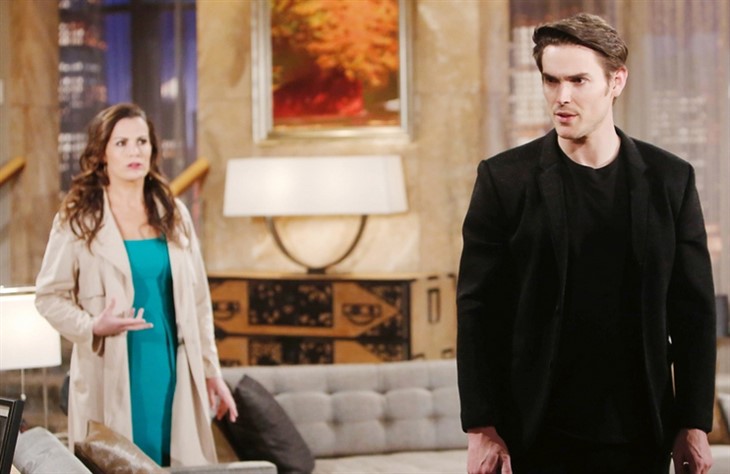 The Young and the Restless (Y&R) spoilers for Monday, September 13, 2021, reveal Chelsea trying to manipulate Adam from afar. Will it actually work?

The Young And The Restless Spoilers – Is Chelsea Newman Up To Her Old Tricks?

Chelsea (Melissa Claire-Egan) might not be in Genoa City and is only communicating with Adam (Mark Grossman) and others via video chat of late, but that doesn’t mean she doesn’t want input into whatever lives she can manipulate. Right now, she is not happy at all that Adam has hired Sally Spectra (Courtney Hope) and continues to grow closer to her. Adam may have told Sally that they need to keep their relationship as just business, but Chloe (Elizabeth Hendrickson) clearly told Chelsea that Adam brought the woman as his date to the Newman Media party.

On Monday, Chelsea issues Adam an ultimatum about Sally. What exactly does she have to hold over his head aside from Connor? Would she be so cruel as to use her son to make sure Adam stays away from Sally? This is Chelsea, so she just might.

Ashland (Richard Burgi) thinks everything is going as it should for his wedding in Italy and he can’t wait for it to happen. He may be allegedly dying but at least he’ll have Victoria (Amelia Heinle). He has no idea that Victoria is starting to doubt her decision to rush into a relationship and yet another marriage to a man she barely knows. He also has no idea that Victor Newman (Eric Braeden) has been digging into his past, but he’s about to find out.

Ashland believed he had squared things away with Victoria’s family and they have come to accept him, but on Monday he learns otherwise when Victor confronts him with more information. What did Victor dig up now? Or did Billy Abbott (Jason Thompson) dig something up since he seems to be doing the dirty work for his former father-in-law? Will Ashland be able to talk his way out of this one with easy excuses the way he’s been able to talk his way out of everything else. Stay tuned to the Young and the Restless weekdays to see how these stories play out.