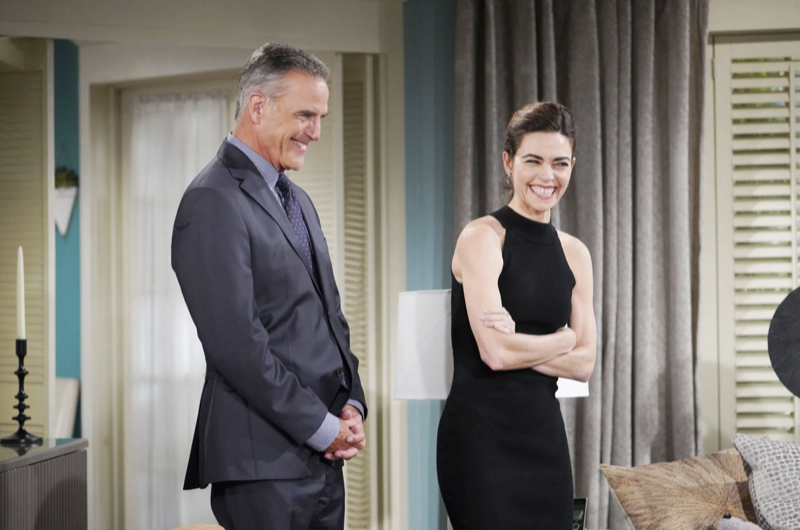 The Young and the Restless spoilers reveal that Ashland Locke (Richard Burgi) is hiding something. It might not be murder but it could be something just as scandalous. When Victoria Newman (Amelia Heinle) finds out the truth, she just might marry him anyway. This would devastate Victor Newman (Eric Braeden), especially if Ashland survives his cancer diagnosis.

What Is Ashland Locke’s Secret

Y&R spoilers reveal that Victor, Nick Newman (Joshua Morrow) and Billy Abbott (Jason Thompson) are all looking into what Ashland could be hiding. Ashland having an explosive secret has been teased for quite some time. However, that secret has not been confirmed. Still, there are several hints being dropped and it’s possible that Ashland is flat broke.

Tara Locke (Elizabeth Leiner) was determined to keep Harrison Locke’s (Kellen Enriquez) paternity a secret. At least, in the beginning she was. Then, she suddenly showed up in Genoa City with her son and nanny. She claimed that Ashland “tricked” her into admitting to the affair with Kyle Abbott (Michael Mealor). Tara is intelligent and crafty, so we highly doubt that Ashland would be able to trick her into confessing. Tara wanted to exit that marriage and was desperate to get another meal ticket… so perhaps she realized that there was no money left. That would certainly explain why she was so desperate to become a “family” with Kyle.

It would also explain why Tara stole from those who invested in her business. At first, she claimed that Ashland had funded her business and the divorce meant that the gravy train would stop. That might not be the real reason her company was in the red, though. Ashland simply didn’t have any money left to support her latest business venture. Tara desperately trying to hide her company’s real financials from Lauren Fenmore Baldwin (Tracey E. Bregman) makes sense now.

Selling Off Properties And Business

The Young and the Restless spoilers reveal that Ashland took Victoria to New York. He was selling all of his properties and the contents. Selling the properties might be explainable but why liquidate all the contents? That usually only happens if someone is bankrupt and needs to pay off a lot of creditors.

Perhaps Ashland unloading Cyaxares — now Newman Media — might have been his first attempt to pay off all his creditors. When Ashland tried to strongarm Victor into paying more than they initially agreed, perhaps it was a move of a desperate man who had run out of options.

The Young And The Restless Spoilers: Victoria Newman Forgives?

Remember how quickly Ashland agreed to Victoria’s merger idea? If Ashland was really doing well, he would have been more hesitant. When Victoria looked at Ashland’s financials, she just wanted Locke Communications. She never asked to see his personal records. Plus, he moved into Victoria’s house pretty quickly. The offer might have been too good to pass up. Hotels can get pretty pricey, especially if someone is living off of their last credit card.

Victor will want Victoria to end the engagement immediately to protect Victoria and Newman Enterprises. However, she is madly in love with Ashland and just might forgive him. If she marries Ashland if he’s flat broke, will it be a huge mistake?