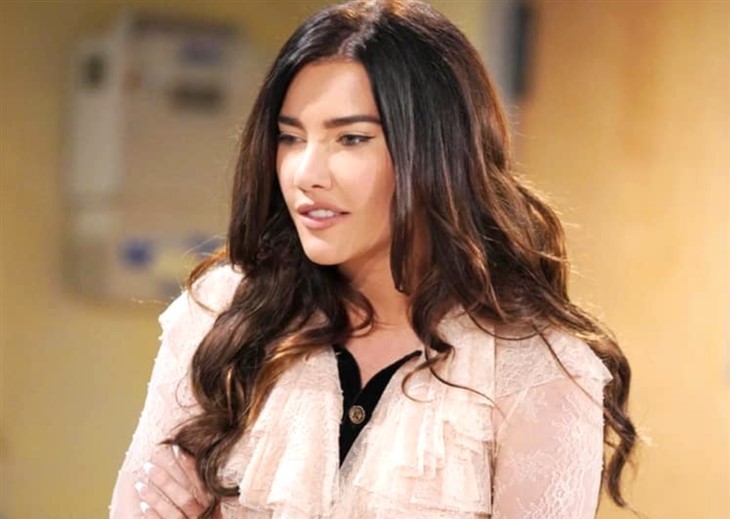 The Bold and the Beautiful (B&B) spoilers reveal that in Los Angeles John “Finn” Finnegan (Tanner Novlan) will make his decision. The newlywed must choose between Steffy Forrester (Jacqueline MacInnes Wood) and Sheila Carter (Kimberlin Brown). It’s likely that Finn chooses his birth mother, but doesn’t want to lose his wife. Finn could give Steffy an ultimatum — accept Sheila or end the marriage.

The Bold and the Beautiful Spoilers  – Steffy Forrester’s Brief Victory

B&B spoilers reveal that after Steffy came home and found Hayes Forrester Finnegan in Sheila’s arms, she couldn’t even look at Finn. For a short time, Finn moved into the guest house. Eventually, Finn asked Steffy if they could talk and that’s when the doctor agreed that Sheila couldn’t be a part of their lives. Steffy was relieved and it seemed like everything was going to be okay with the newlyweds.

However, the minute Steffy left for work, Sheila strolled into the house as if it belonged to her. Finn was shocked, then told Sheila that she had to leave and there would be no more contact.

Right after Finn tried to kick Sheila out, she collapsed and was rushed to the hospital. When Steffy learned what happened, she raced to the emergency room. As Finn explained Sheila’s condition and expressed concern, Steffy told him that it was just a con. Of course, Finn is convinced the health crisis is real because he’s a doctor and would “know” if Sheila was faking. What he probably doesn’t realize is that Sheila used to be a nurse and knows how to fabricate these kinds of schemes.

The Bold and the Beautiful spoilers – John Finnegan Bonds With Mother

The Bold and the Beautiful spoilers reveal that Finn will do a complete 180 with Sheila. Instead of cutting her out of his life, the collapse scared him. Now Finn insists that he just found his birth mother, so he can’t lose her and won’t abandon her. Finn will continue to bond with Sheila while Steffy reels with disbelief.

Finn now realizes that it’s not possible for Steffy and Sheila to coexist. Even though he doesn’t want to, he will need to choose one or the other. It seemed as if Finn would automatically pick Steffy, as that is his wife the mother of his child. However, it is beginning to look like he won’t give up Sheila.

Finn wants both his mother and his wife, so he will likely come up with a suggestion to make that happen. Unfortunately, Steffy might not like it and could reject the idea. It’s possible that Finn will give Steffy an ultimatum. She either accepts that he’s going to have a relationship with Sheila or the marriage is over. Finn probably doesn’t actually plan on walking away from Steffy. What he’s hoping to accomplish is a compromise so he can get to know his birth mother and keep his marriage intact. However, will Steffy say goodbye to Finn or could she actually end up agreeing to his terms?

Days Of Our Lives Spoilers: Jealousy Pushes Ava And Philip To The Brink