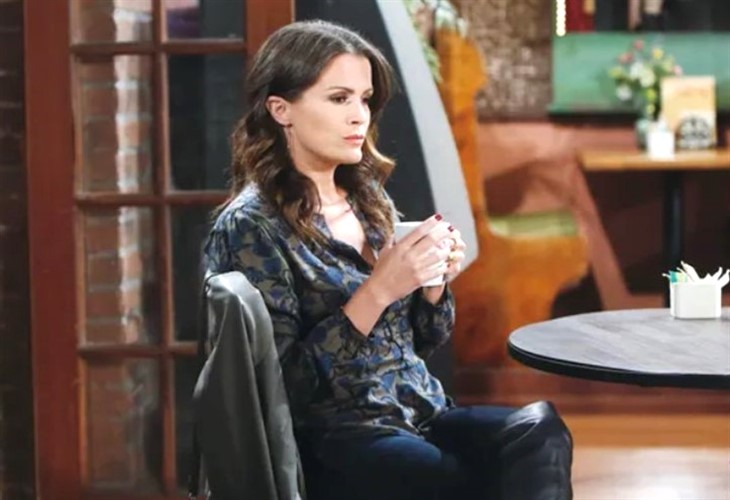 The Young and the Restless (Y&R) spoilers are buzzing about the return of Chelsea Lawson (Melissa Claire Egan). She should be arriving back in Genoa City by the end of September and early October. Anyone who is a “sho-nuff” Y&R fan knows Chelsea will bring the “D” (drama)

There is an old James Brown song called “Papa Don’t Take No Mess. And neither does Chelsea. So, fasten your seatbelts. We are in for a roller coaster ride of events.

The Young and the Restless spoilers have shown us that Chelsea (Melissa Claire Egan) and Adam Newman (Mark Grossman), her baby daddy, are not on the same page about their relationship. They must determine how to proceed in parenting their son Connor (Judah Mackey).

Though we know Chelsea wants to proceed by reviving their union. In other areas they are much more in sync for now. Chelsea will come back to take the position at Newman Media Adam promised her upon her return. She is a savvy fashion designer. And she is supposed to partner running the fashion division with her BFF Chloe Mitchell Baldwin ( Elizabeth Hendrickson).

Y&R Spoilers predict Chelsea (Melissa Claire Egan) will not warm up to the addition of Sally Spectra (Courtney Hope). Sally was brought on during the absence of Chelsea. Chloe (Elizabeth Hendrickson) will be caught in the middle. Salley is a talented fashion designer also. And that fact should just exacerbate the situation. We saw the reaction Chelsea had when she first learned from Chloe about the new addition. Chelsea is a good judge of people. After all that was how she made her living and con knows con. So, we can expect fireworks.

The Young And The Restless Spoilers – Bitter Pills To Swallow

The Young and the Restless spoilers are suggesting Chelsea (Melissa Claire Egan) will have to accept the changes that await her in Genoa City. Her baby-daddy seems to be moving on with someone Chelsea does not like. We have already seen that that someone might be Sally Spectra (Courtney Hope).

We also saw that Sally was able to connect with Connor in the park. And what does that mean for her son Connor (Judah Mackey)? Was their connection a clue of things to come? Will there be a triangle relationship of sorts putting Connor in the middle between Chelsea and Sally? Sounds weird but these are the soaps, and anything can defy reality in Soap Town, USA.

Please keep coming back for the latest happenings with Y&R. You will always find The Young and the Restless Spoilers here as well as news and updates.