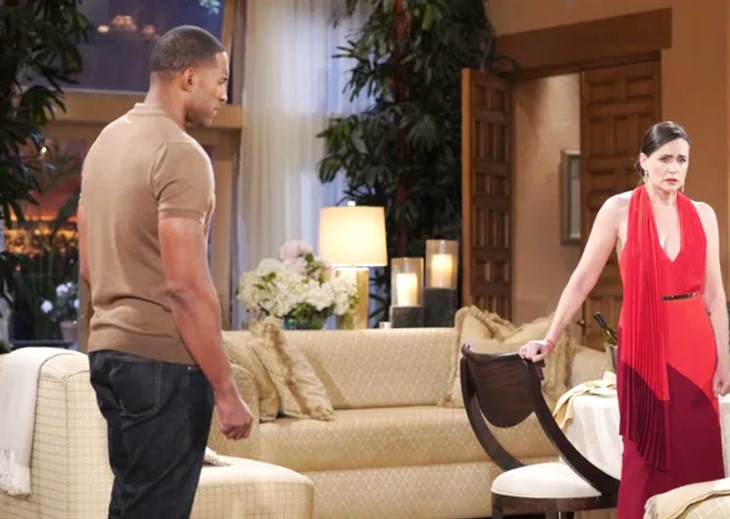 The Bold and the Beautiful spoilers for the week of September 27 reveal that Justin Barber (Aaron D. Spears) finds answers for Ridge Forrester (Thorsten Kaye). As Quinn Forrester (Rena Sofer) and Carter Walton (Lawrence Saint-Victor) are in bed together, Justin walks in the bedroom. However, will Ridge or anyone else believe their story?

The Bold And The Beautiful Spoilers – Ridge Forrester’s Assignment

B&B spoilers reveal that Ridge and Brooke Logan Forrester (Katherine Kelly Lang) are concerned about Eric Forrester (John McCook). Although Eric and Quinn have reconciled before, something is different this time. Nobody can seem to get answers from Eric and the patriarch seems depressed rather than happy.

As a result, Ridge has given Justin the task of digging into every single part of Quinn’s life to find out what’s really going on.

Eric has come up with an arrangement that allows Quinn and Carter to engage in passion. At first, “Quarter” didn’t want to do it as it felt completely wrong. However, they eventually gave into temptation. The two will become intimate again during the week of September 27, but they won’t be alone in Carter’s bachelor pad.

The Bold And The Beautiful Spoilers – Justin Barber Walks In

The Bold and the Beautiful spoilers reveal that a sneak peek photo from the new issue of Soap Opera Digest teases what to expect. Quinn is laying in bed while Carter is standing over her half-dressed. Just a few feet from the foot of the bed stands Justin, just watching them. Quinn looks absolutely horrified while Carter has the expression of confusion as well as anger.

Quinn will probably tell Justin what is really going on and that being with Carter is what Eric wants. Of course, it is an unbelievable story, so Justin probably will think it’s just another one of Quinn’s lies. However, Carter isn’t a liar, so when he insists that it’s true, Justin might be completely stunned. Of course, Justin will immediately report all of this back to Ridge.

When Ridge finds out that Quinn and Carter are sleeping together again, he will blow up in a rage. However, what will he say when Justin tells him that this was all Eric’s idea? How will Ridge, Brooke and everyone else process this? At some point, Ridge will confront Eric about Quinn and Carter’s story. Will Eric even admit that it’s true or could he be too embarrassed to admit the truth? We will have to keep watching the CBS soap to find out what happens next with this storyline.