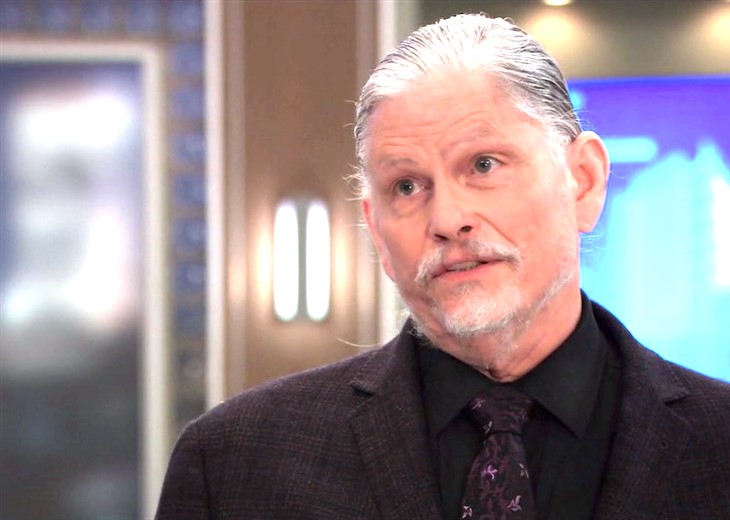 General Hospital Spoilers tease that Brando Corbin (Johnny Wactor) plans to attend the wedding of Jason Morgan (Steve Burton) and Carly Corinthos (Laura Wright) not as a member of the Corinthos Organization, but simply as a family member wanting to share in the celebration. Unfortunately, Cyrus Renault (Jeff Kober) is not one to forget betrayal, and he is making plans even from his supposedly high security prison and Brando is one of the most likely targets.

General Hospital Spoilers – Cyrus Renault’s Hits On Laura Webber And Martin Grey May Be A Diversion!

Cyrus wants revenge and his first two victims, sister Laura Webber (Genie Francis) and brother Martin Grey (Michael E Knight) were warned in time and have been moved to a safe location. But is that what Cyrus is really after? Cyrus loves his siblings and is more interesting in corrupting them then killing them. But he certainly hasn’t forgotten Brando’s betrayal. Brando seems to be on the verge of happiness and that is something Cyrus won’t allow.

Brando pretended to be a loyal employee of Cyrus’ for months while he was really providing information on Cyrus’ activities to the Corinthos Organization, providing valuable information that saved lives on more than one occasion. Cyrus eventually discovered Brando’s treachery and gave him a final test. Brando failed and Cyrus was about to kill him but Damian Spinelli (Bradford Anderson) helped coordinate Brando’s rescue Brando had inquired about remaining in the mob, but Sasha Gilmore’s news made Brando change his plans. At some point while pretending to work for Cyrus, Brando fell in love with Sasha Gilmore (Sofia Mattsson) and now they are expecting a child together. But Sasha would only agree to let Brando be a part of her life, and their unborn child’s, if he left the mob for good. Brando happily agreed.

General Hospital Spoilers – Leaving The Mob Isn’t As East As It Sounds!

But Cyrus won’t care that Brando has left the business. All he will care about is making Brando pay. It can be argued that Cyrus’ attempt to kill Brando and his mother Gladys Corbin (Bonnie Burroughs) is what ultimately led to his downfall, Cyrus has partnered with at least one of the five families which will allow him to put a hit out on Brando even from a prison cell. The most likely place for this attack will be at Jason and Carly’s wedding. Brando could end up in the wrong place at the wrong time, but chances are he is Cyrus’ primary target,

GS Spoilers – What Do You Think?

Is Cyrus really after Laura and Martin? Or is that a smokescreen for his real victim, Brando? Will Brando die just as he is starting a new life with a new baby? Only time will tell, so stay tuned to General Hospital airing weekdays on ABC. And don’t forget to check back right here regularly for all your General Hospital news, information and spoilers!