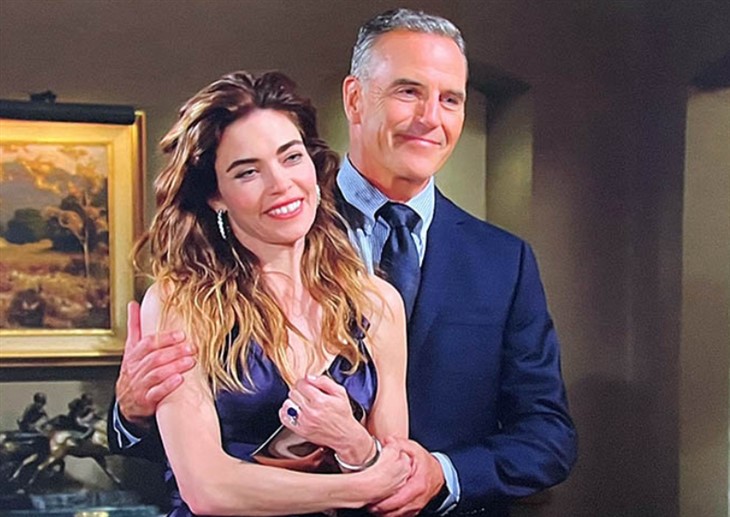 The Young and the Restless spoilers reveal that Victoria Newman (Amelia Heinle) and Ashland Locke (Richard Burgi) are in a whirlwind romance. Already planning their wedding, Victoria claims it’s due to Ashland dying. However, fans have different opinions about what is really going on. As for Heinle, she teased Victoria’s “emotionally disturbed” reasons for moving so fast.

The Young And The Restless Spoilers – Victoria Newman’s Loneliness

Y&R spoilers reveal that Victoria has pretended to be fine being a single career woman. However, fans remember her video diary, which sometimes had her breaking down emotionally. In all of her relationships, Victoria has been the strong one, the woman who took charge and never seemed to find anyone who was on her level. Then, Victoria met the “Locke-ness Monster.”

Ashland and Victoria did seem to get along when they first had drinks together. Then, Ashland was allegedly diagnosed with lung cancer. As they went on their first trip together, Ashland wanted to move ahead with passion. However, Victoria hesitated and it took her a bit before she finally gave in.

The Young And The Restless Spoilers – Ashland Locke’s Ulterior Motives

The Young and the Restless spoilers reveal that Victoria went from being hesitant to planning a wedding. Was it nerves or not wanting to get attached? Or was it because Victoria knows deep down that something isn’t quite right? Heinle wouldn’t say in her interview with SoapCentral. However, she does feel that Victoria will be able to brush herself off if anything happens.

“I think she might lose her ground for a bit if something does happen — she would probably have a moment of weakness — but she always rallies with Victor [Newman, Eric Braeden]. She always ends up going to her dad, and he always ends up supporting her in the end, and they always fight back.”

As for what is really causing Victoria to move full-steam ahead with marrying Ashland, fans have different theories. What did Heinle have to say about this? Is it Victoria’s loneliness or wanting to forget Billy Abbott (Jason Thompson)? Is it all part of a bigger plan that fans don’t know about yet? Or does Victoria really want to spend all the time with Ashland that she can before he dies?

“I was going to say some emotionally disturbed reasons! [Laughs] But yeah, I mean, there is probably that element, as well. There was an episode where she was saying, ‘I really don’t have much of a life,’ basically, and I think she was feeling lonely, and maybe part of the reason is based on that. Because I don’t think she’d be the type of person that would just marry him just because he’s dying. There has to be more to it than that. At first, it seemed the way it was being written was that she wanted to give him the best, last whatever time he has left, whether that be a year or a couple of months, but there is definitely more to it than what meets the eye.”

What do you think of the relationship with Victoria and Ashland? What are your theories on what is really going on? We will find out soon enough as the wedding date is on October 15.

Be sure to catch up on everything happening with Y&R right now. Come back often for The Young And The Restless spoilers, news and updates.