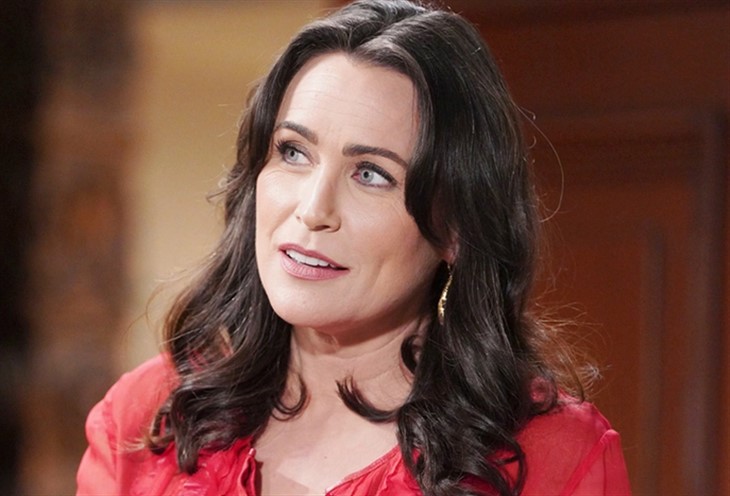 The Bold and the Beautiful spoilers document that Quinn Fuller Forrester (Rena Sofer) does love Eric Forrester (John McCook). But her actions in recent weeks naturally led to confusion.

Willingly betraying Eric with Carter Walton (Lawrence Saint-Victor) wasn’t something Quinn planned. However, she and Carter knowingly continued seeing each other after committing what they both realized was a terrible mistake in judgment.

Quarter’s guilt was overtaken by the emotions they developed for each other as the storyline continued. That’s how love is, it isn’t fully logical in the real world or on the soaps.

Quinn argued that Eric’s pull away from her was a form of emotional abandonment. That reflected Quinn’s self-created license that enabled Quarter to happen.

But it must be said that Eric later came to realize that he treated his wife harshly. In so doing Eric felt that he provoked Quinn to act against him. It takes quite the forgiving soul to walk down that circuitous road.

While it was true that Quinn meddled in Ridge Forrester (Thorsten Kaye) and Brooke Logan Forrester’s (Katherine Kelly Lang) marriage, with the intent of pairing Shauna Fulton (Denise Richards) with Ridge, Sofer’s character hadn’t actually done anything directly against Eric through her plan. Though it can be said that she defied his wishes to stay out of his son and ex-wife’s marriage.

Carter was a loyal employee and friend to the Forrester family. Ridge considers Carter to be his best friend. Eric thinks of him as a son.

Eric came to believe that Carter was overwhelmed by Quinn’s power. It’s fair to pause and say that Eric and Carter allowed themselves to get carried away within Quinn’s aura.

Yes, Quinn is impressive. But both men are fully capable of developing relationships with other women besides her. So, both guys can and have taken responsibility for their own actions. Quinn doesn’t control them or at least does so only when they let her.

Quinn was committed to Eric, then she fell for Carter. Now, after Eric plays some tunes on his piano at the mansion, latent emotions are stirred.

Is Quinn really the type of person who is mostly affected by whoever she’s with at that moment? No. She has the ability to determine what’s best and right no matter the circumstances.

Here’s hoping that Quinn pushes herself to make an honest decision. Neither man should be strung along. Eric represents history and maybe the future.

Carter is a fresh choice. But the option to continue the triangle can’t be taken without eventual dramatic consequences for all involved on B&B.

The Swedish Royal Family Comes Together To Celebrate Their Youngest Member