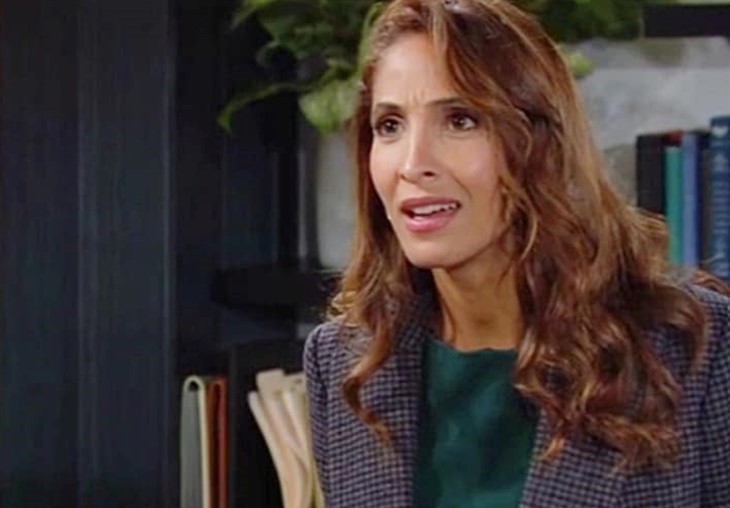 The Young and the Restless spoilers for Thursday, December 9, 2021, reveal Lily Winters trying not to show how much she currently disdains Victoria Newman Locke.

The Young And The Restless Spoilers  – A New Main Rivalry?

Lily (Christel Khalil) and Victoria (Amelia Heinle) weren’t always enemies. They were never BFFs, but the last few years have caused some problems between them. When Lily was in jail and Billy Abbott (Jason Thompson) arrived to inform her that Victoria kissed Lily’s husband, Cane Ashby (Daniel Goddard), things started getting tense.

Now, Lily is with Victoria’s ex, Billy, Victoria is married to Ashland Locke (Richard Burgi), and Billy just tried to ruin Victoria’s wedding and new marriage while living with Lily and running a media company with her. Billy managed to cost them the company, Lily is now filled with offers to get away from Billy professionally, and Victoria is not sure how to feel about either one of them.

On Thursday, Victoria and Lily have to deal with one another and you could cut the tension with a knife. After all that has happened between them, is it finally time for Lily and Victoria to come to blows?

Victoria seems to have ice in her veins sometimes, so it’s a big day of possible rivalries for her as her father issues a challenge to both Adam Newman (Mark Grossman) and Vicky. Is The Great Victor Newman (Eric Braeden) determined to pit more of his children against one another? After all, he does love playing with people’s lives and watching what happens.

Mariah Copeland (Camryn Grimes) might still be keeping Tessa Porter (Cait Fairbanks) at arm’s length as her life changed when she was both pregnant and kidnapped, Noah Newman certainly isn’t keeping his distance from his sister’s girlfriend.

Noah (Rory Gibson) and Tessa once dated and it didn’t end well, but since Noah’s return to Genoa City, the two have been closer than ever, at least emotionally. They seem to have a natural and easy rapport and on Thursday, they team up for a new project. Stay tuned to The Young and the Restless weekdays to see how these stories play out.

Days Of Our Lives Spoilers: Sami’s Free…And Is About To Get The Shock Of Her Life