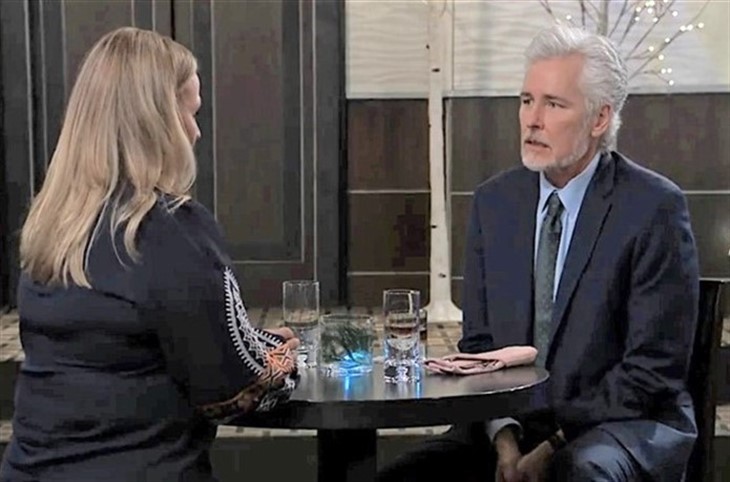 General Hospital (GH) spoilers and rumors tease that Martin Grey (Michael E. Knight) and Laura Collins (Genie Francis) are not as safe as they think they are – there’s a good possibility that Cyrus Renault (Jeff Kober) sent that fake cleaning lady in a recent episode of General Hospital!

General Hospital viewers will recall Cyrus telling Sonny Corinthos (Maurice Benard) on the phone that he still has contacts on the outside! Cyrus had called with his “condolences” regarding the presumed death of Jason Morgan (Steve Burton). Sonny had set up a twenty-four hour news blackout regarding Jason’s presumed death so Cyrus would have had to have found out from a different source!

General Hospital viewers will recall that Cyrus and Peter August (Wes Ramsey) worked together before – trying to frame Jason for Franco Baldwin’s (Roger Howarth) death. It’s quite likely that Peter got a call out to Cyrus before Robert Scorpio (Tristan Rogers) and Anna Devane (Finola Hughes) took him into custody on Cassadine Island – how else would he have known? It’s entirely possible that Cyrus has a network of contacts that have found the safe house that Martin and Laura have been housed in since it was revealed Cyrus had put out hits on both of them; and Peter and Cyrus may have combined their contacts as well!

General Hospital viewers will recall that a fake cleaning lady, posing as the regular cleaning lady Bonnie (Subhah Agarwal) showed up at Martin and Laura’s safe house in a recent episode of General Hospital. Agent Silva (Joe Nieves) would not allow her to come in, but made her leave her satchel of cleaning products outside in a bag. In the meanwhile “Bonnie” went back to her car, and Silva made a call as well – presumably to the bomb squad! Laura had been anxious to leave the safe house and get back to Port Charles over Victor Cassadine (Charles Shaughnessy) having “returned from the dead” and she felt she needed to protect Nikolas and Spencer Cassadine (Marcus Coloma, Nicholas Chavez) from Victor.

Little does Laura know that Nikolas and Victor had been working together during the whole time that both of them had been presumed dead! With Peter apparently still being in contact with Cyrus and possibly working with him, there is a distinct possibility that Peter could have hypnotized someone who knows where the safe house is like he did Drew Cain (Cameron Mathison) and Victor’s guards – even one of the FBI agents guarding the safe house!

General Hospital viewers will recall that Martin is continuing to try to make Laura stay at the safe house, telling her that “this too shall pass” but not if she does something stupid like leave! Of course, General Hospital viewers know that Martin is trusting in the protection of the FBI agents but Laura’s instincts may be right on target – they may actually no longer be safe at their current location!

Neither Laura nor Martin know Peter’s connection to Victor, even though Victor claims he’s been trying to sever it – and they don’t realize that Peter and Cyrus may still have an active connection as well! It’s not for certain that Laura has been told about Peter’s survival or what happened on Cassadine Island either, although it was Agent Silva who told her about Victor being alive, having an immunity deal with the WSB, and living in Port Charles! Martin and Laura think they are safe for the time being, but they actually may not be!