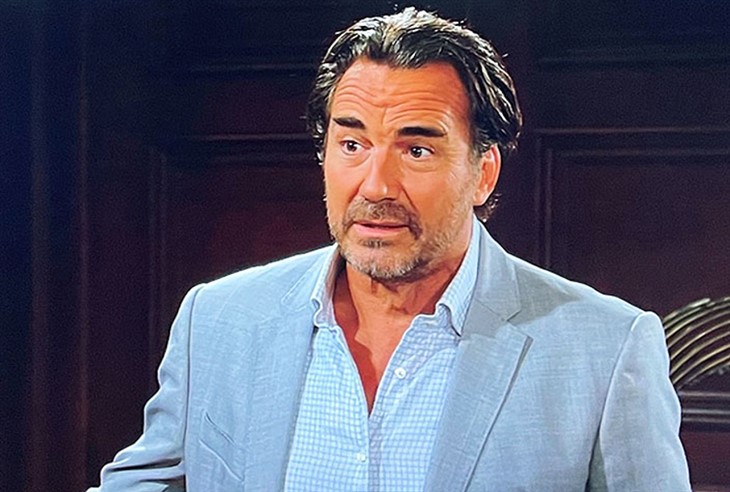 One good reason that the powers that be at The Bold and The Beautiful to put Ridge and Taylor back together is that it’s about time for “Bridge” to “Un-Bridge” once again. Sure, viewers of The Bold and The Beautiful who are incurable romantics love the idea of Brooke Forrester (Katherine Kelly Lang) and Ridge Forrester always finding their way back to each other, but Ridge really proved himself an insensitive bully in the episode that ran on November 29! Viewers of The Bold and the Beautiful know that Hope Logan Spencer (Annika Noelle) has invited her birth father Deacon Sharpe (Sean Kanan) to be in her and her baby Beth Spencer’s (River Davison) life and Brooke has supported her in it.

B&B Spoilers – Ridge Forrester Made The One Mistake A Stepparent Should Never Make!

Viewers of The Bold and The Beautiful will recall that Ridge and Brooke got into a terrible argument after Deacon had stayed in Hope’s cabin to make a couple of phone calls with her permission and Ridge accused him of breaking in! Brooke came in on the worst part of Ridge’s argument with Deacon, and she reminded Ridge that it was Hope’s choice, and Hope felt she needed and wanted her birth father in her life. Ridge told his wife, Hope’s mother, the one thing that a stepfather NEVER tells his wife about her child – even if she’s grown – he didn’t CARE what Hope needed or wanted! For most mothers, that would be plenty to kick stepdad to the curb, and many viewers of The Bold and The Beautiful would agree!

Viewers of The Bold and The Beautiful can say that another good reason that Ridge and Taylor should get back together is that their own children, Steffy Forrester (Jacqueline Macinnes Wood) and Thomas Forrester (Matthew Atkinson) need their mom in their life for support, and Douglas Forrester (Henry Joseph Samiri) should get to know his grandma Hayes! Plus, Taylor has another grandbaby in Hayes Forrester Finnegan (Piper Harriott) and then there’s Kelly Spencer (Colette and Avalon Gray). Viewers of The Bold and The Beautiful may ask what grandma doesn’t want to be near her grandchildren and watch them grow and make sure they’re protected and happy?

Viewers of The Bold and The Beautiful know Steffy is dealing with a husband who she just found out is the son of Sheila Carter (Kimberlin Brown) and although she and Thomas don’t voice it, they are scared to death and scarred from seeing Taylor “die” at the hands of Sheila, even though they found out she wasn’t dead at all years later. Having their mother nearby will help them remember that was then and this is now, and viewers of The Bold and The Beautiful know that Ridge and Taylor should be a united front against the reappearance and manipulations of “Sheiladevil” as Deacon calls her!

Again, viewers of The Bold and The Beautiful are seeing “Bridge” disintegrate before their very eyes once again. It takes so little for Ridge’s jealousy to rage out of control that it proves that his marriage to Brooke has no foundation – he doesn’t trust her! But then again, how many times has she proven that she cannot be trusted with other men? Stephanie Forrester (Susan Flannery) didn’t give Brooke that derogatory nickname that it’s not nice to repeat for no reason! Brooke conceived Hope with Deacon when Deacon was married to her older daughter Bridget Forrester (Ashley Jones) and she’s stolen men from her sisters as well over the years! Ridge already is accusing Brooke of still being in love with Deacon, and even though she vehemently denies it, he may be right – but even if he’s wrong, he’ll think he needs payback, and what better way to get payback than to hook up with his own ex Taylor in upcoming episodes of The Bold and The Beautiful?!