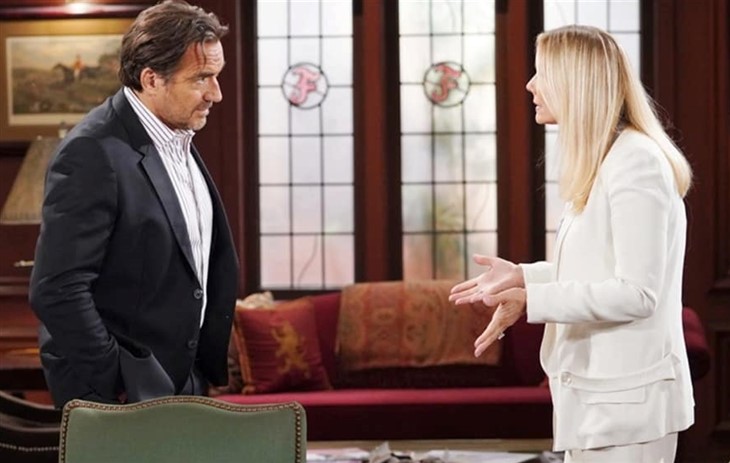 Viewers of The Bold and The Beautiful will recall that as if Sheila Carter (Kimberlin Brown) suddenly showing up as his son in law’s birth mother wasn’t bad enough, all of a sudden her male version shows up too! Or, at least that is how Ridge defines Deacon! Even though Deacon has never been as dangerous or as obsessive as Sheila, Ridge makes no difference in the two of them.

Viewers of The Bold and The Beautiful will recall that Ridge was offended by the nerve of Deacon showing up at his home, and immediately ordered him out as he was talking with Brooke and Hope Spencer (Annika Noelle). He didn’t like it any better when he saw him the last time, at Hope’s own home and assumed Hope didn’t want him there either and took offensive action against Deacon! But Hope had invited him and made her wishes plain that she wants to get to know her birth father for herself, and make her own judgments. But when he showed up at Ridge’s house and Brooke and Hope both defended Deacon, he couldn’t understand it at all!

B&B Spoilers – Brooke Forrester Sided With Hope Spencer Who Obviously Must Have Lost Her Mind!

Viewers of The Bold and The Beautiful will recall that Brooke had sided with Hope, who obviously must have lost her mind to trust Deacon at all. But longtime viewers of The Bold and The Beautiful know that Ridge is of the opinion that people cannot change, and they are born good, or born evil – when that opinion happens to be convenient for him, of course. There was a time not all that long ago when Brooke acted like Ridge’s son Thomas Forrester (Matthew Atkinson) was evil and couldn’t change – and that was a burr in Ridge’s behind! But now the shoe’s on the other foot and Brooke is defending Deacon!

Ridge simply doesn’t understand it! Before Ridge found Deacon in his house that day, however, and before Deacon himself even showed up, Hope and Brooke had a heart to heart talk about Deacon. Hope helped Brooke remember the good things about him and the sweet parts of him. Yes, it was wrong of Brooke to try and steal her daughter Bridget Forrester’s (Ashley Jones) husband at the time, because that affair hurt Bridget tremendously. But there were good things, and one of the best things that came out of it was Hope herself!

The Bold And The Beautiful Spoilers – Ridge Forrester’s Accusation

Viewers of The Bold and The Beautiful will see in an upcoming episode of The Bold and The Beautiful Deacon will acknowledge he remembers all those good times with Brooke as well. But he also tells her he doesn’t want to cause problems in her marriage, he just wants to be in their daughter and granddaughter’s lives. Yet, Brooke seems to be looking at Deacon in a certain way, and Ridge cannot help but notice!

Whether it’s really his perception or his jealousy that prompts him, he accuses Brooke of having feelings for Deacon after all those years! Steffy Forrester (Jacqueline Macinnes Wood) eggs her father’s jealousy on, telling him that no one can trust Deacon! Perhaps the more appropriate response would be that no one can trust Brooke, because it was an affair with Deacon that produced Hope in the first place! Ridge tells Steffy that this won’t end well!