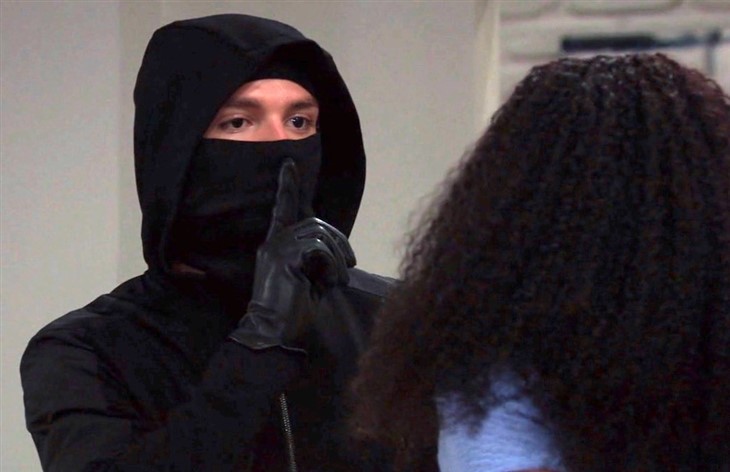 Why did General Hospital recast Spencer?  GH spoilers and comings and goings reveal the return of Spencer Cassadine in the form of actor Nicholas Chavez. We haven’t yet seen his face but we have seen his eyes and apparently, he caused Trina to have a very “Carrie”-like entrance to her own graduation party. We’re pretty sure Friday’s General Hospital scene was supposed to be a take on the classic Sissy Spacek film.

The absence of Spencer Cassadine on General Hospital as we watched Josslyn (Eden McCoy) and Cameron (Will Lipton) grow has been glaring as they were all children playing together — and fighting with one another — at one time. Keeping Spencer younger than Joss and Cam when he would visit and then keeping him away as the other two teen characters graduated high school never made sense.

Now that Joss and Cam are going to be college students, along with their amazing friend Trina (Sydney Mikayla), Spencer needs to return and he also needs to look like a college student, which the former Spencer, Nicolas Bechtel, does not. He is a fine actor, but he is also still not college age. If the return of Spencer was necessary for story purposes, then a recast was needed.

GH Spoilers – What Will A New Spencer Cassadine Be Up To?

It looks like General Hospital is intent on pairing Spencer with Trina, which would almost make things come full circle as Spencer’s father, Nikolas (then, Tyler Christopher), was once in love with Trina’s Aunt Gia (Marisa Ramirez). Good taste runs in the family? With Joss and Cam sharing a kiss on Friday’s episode, it seems General Hospital is finally going to pair these two characters then Trina needs her own love interest and a recast Spencer Cassadine sure does fit the bill.

We expect Spencer to be the young Dark Prince his father once was as he is clearly the one who has been stalking Ava (Maura West). He will also be a formidable opponent for his stepmother and Ava needs someone new to spar with now that she is friends with Nina (Cynthia Watros) and semi-getting along with Carly (Laura Wright).

Giving Ava a teenage boy as an enemy for her to snarl at is absolute genius. Will the new Spencer on General Hospital be much more Cassadine than Valentin?