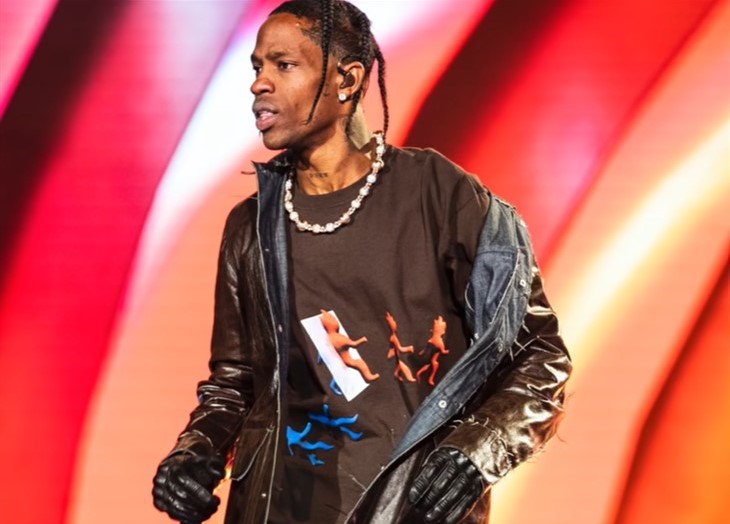 Fans gossipped and speculated about Kylie Jenner and Travis Scott. As usual, anything that anyone does who is associated with the Kardashian family makes the news. Well on Friday last week, gossip fell away as the enormity of lost lives at the Astroworld Festival concert hit the headlines. As survivors take to social media and share their terrifying ordeals, anonymous heroes’ stories start to emerge.

When Kardashian fans heard the news that so far, eight people died during a surge at the concert, folks express their dismay, Whether Kylie Jenner and Travis wear wedding rings or not suddenly seems unimportant. Does it really matter if Khloe Kardashian showed too much flesh in a bikini? After all, the tragedy that went down on Friday took fans way beyond the world of the random world of celeb gossip. Whether young or old, fear that too many people in confined spaces might lose their minds and panic is very real. Moms worry about their teenage kids. Meanwhile, footage of previous tragedies remains in the minds of older folks.

Reportedly, Travis Scott couldn’t see what was going on as the crowd surged. Apparently blinded by the lights, eventually, someone got his attention. However,  it was too late for at least eight people. More people suffer in ICU, including a ten-year-old. An expert, Paul Wertheimer, cited by MSN felt that the barriers and overcrowding led to an avoidable tragedy. He concluded that it was “poorly managed.”Many stories emerged of the terrifying ordeals that people went through. People Magazine reported on a few of them as did other outlets

Possibly, a lot of people reached out to help their friends in the crush. Perhaps other heroes also helped to save the lives of random people they didn’t know. However, one survivor shared how an anonymous person saved them from death. Down on the ground is not a good place to be in a stamped and panic. And, that’s here one person suffered through at least 2 minutes of hell. Praying, thinking death was coming, someone reached down and helped her get up and out 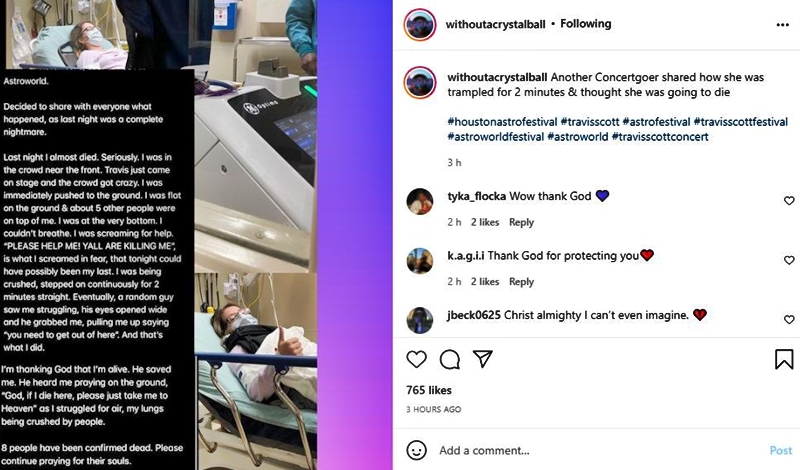 Katie Joy of Without A Crystal Ball picked up some posts by survivors and shared them on Instagram. One of them seemed heartwarming. Followers heard about anonymous heroism at the Travis Scott concert that went so wrong. The survivor, (name not supplied), said it went for about 2 minutes, but in the crush, does it really matter whether it was less than that? Then she explained that a “random” guy stopped to help her. He told her, “you need to get out of here.”. Fortunately, she did. But perhaps, if he hadn’t stopped, yet another name would be added to the death toll.

Followers React In The Comments

Many people commented on the experience that was shared about the Travis Scott tragedy. One of them wrote, “Was watching some of the video with people being helped over the barrier. There was a young man in a white t-shirt helping person after person while some people were just standing there. Its amazing how some people go beyond in a,situation like this and [others] barely pay attention.”

Another person replied saying, “I think that should be the biggest takeaway from this situation. This all could have been avoided if people didn’t behave like wild animals and for absolutely no reason.”

Be sure to catch up on everything happening with The Kardashian family right now. Come back here often for more news, and updates about the tragedy during the Travis Scott Astroworld concert.