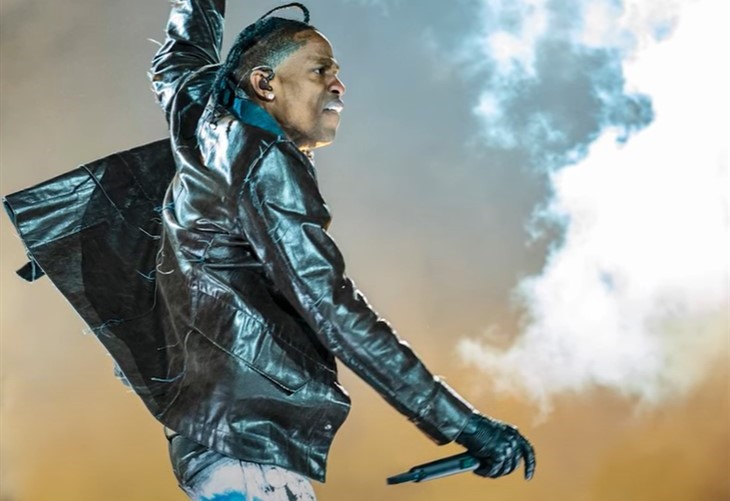 Travis Scott has sought to keep a low profile in the wake of the Astroworld Festival tragedy, which resulted in ten deaths and numerous injuries. But staying out of the spotlight hasn’t halted the lawsuits, which reportedly could add up to more than $3 billion. The Astroworld concert fallout also includes the rapper getting pulled from the Coachella lineup and Anheuser-Busch discontinuing Scott’s Cacti hard seltzer.

Given the situation, Travis’ decision to hide out seems understandable. As a result, some expressed surprise that Scott ignored the Astroworld tragedy to attend his girlfriend Kylie Jenner’s baby shower. Find out what insiders revealed about his appearance at the party below.

Kylie Jenner, 24, currently is pregnant with her second child with Travis Scott, 30. Although the two have gone through ups and downs in their on-again, off-again relationship, that baby bump reportedly has united them again. And despite the Astroworld tragedy, Travis decided to attend Kylie’s recent baby shower.

An insider told Hollywood Life that Travis sought to avoid attention at the party for his girlfriend. Jenner may have played a key role in convincing Scott to accompany her to the baby shower because of her desire to celebrate her pregnancy with family and friends.

“Even though the public isn’t hearing much from Kylie in terms of social media, of course she still wanted to celebrate her pregnancy with her closest friends and family,” revealed the source. “The last thing Kylie needs right now is anymore drama in her life because she’s very pregnant and so she’s focused on doing her best to stay relaxed and healthy.” As a result, Travis did attend but focused on staying “pretty laid back” in the wake of the Astroworld tragedy, added the insider.

Kylie Jenner And Travis Focus On Pregnancy, Not Astroworld

For the pregnant mom, keeping her eyes on the prize of a healthy second baby means everything right now, a second source revealed. But Kylie longed to ignore the Astroworld tragedy because she had planned her baby shower for several months. As a result of the concert fallout, though, she kept the event “really intimate.”

Only close friends and family attended Jenner’s pregnancy celebration, which she held at her sister Khloe Kardashian’s mansion. “At the celebration, Kylie gave an emotional speech where she thanked everyone for coming and talked about how she is so ready for the baby to be born,” added the insider. “Kylie has the overwhelming support of her family and everyone around her.”

As for how her daughter Stormi feels, the source also shared that the little girl understands what mommy’s blossoming belly means. However, the insider speculated that Stormi won’t really understand how it feels to become a big sister until the baby arrives. That arrival reportedly will occur in January.

For now, Kylie has stayed focused on “maintaining a healthy body and mind,” said the source. “Travis was there, but he was very low-key and stayed inside of the house most of the time.” And while Scott has supported Jenner throughout her pregnancy, Kylie reportedly has stayed supportive of her baby daddy as well.