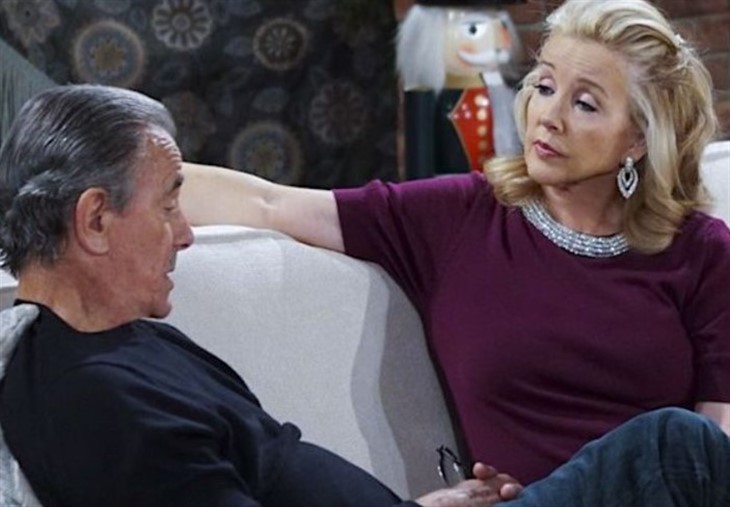 The Young And The Restless Spoilers – Victoria Newman Confronted Her Father About Adam Newman, Then Ashland Locke Had An Apparent Heart Attack

Viewers of The Young and The Restless will remember from a previous episode of The Young and The Restless that Victoria Newman (Amelia Heinle) thought she’d turned the tables on her brother Adam Newman (Mark Grossman). She went to the Newman Ranch and confronted her father about a seldom used bottle of scotch that she had noticed emptier than it should be – even though Adam had been there, he was gone by the time she confronted Victor about hiding him out. Nikki came in on the argument which got rather loud, and said this – meaning arguments between her daughter and her husband – had to stop!

Viewers of The Young and The Restless will also recall that Adam wasn’t the only person to drink out of that bottle of scotch – so did Ashland Locke, (Richard Burgi) when he came to the Newman Ranch to notify Victor that the deal was off and Cyaxeres Media was no longer for sale! Victor didn’t like that, for him a deal is a deal and Locke had reneged on theirs. Victoria now owns the company, which she won in the flip of a lucky coin Locke carried with him, over Billy Abbott (Jason Thompson) who was competing with her. Ashland Locke’s coin wasn’t so lucky for him when he drank that glass of scotch from the same bottle Victoria accused Adam of drinking out of, however. Locke appeared to have had a heart attack immediately after he drank it, which would be very unusual timing – it is more likely that the scotch had been poisoned, and Victor has a good idea who did it!

Y&R Spoilers – Did Victoria Newman Poison The Bottle Of Scotch Hoping Adam Newman Would Drink Some More Of It?

Viewers of The Young and The Restless will recall from that previous episode that Victoria was adamant that Adam was still there on the ranch. Adam had drank out of the scotch while waiting for Victor, to tell him goodbye. He had been hiding out in the tack room with the horses but had come back to the ranch house to tell him he was going on the run and needed time away from Genoa City. He had been badly hurt by Chelsea Lawson’s (Melissa Claire Egan) betrayal and framing of him for poisoning Detective Rey Rosales (Jordi Vilasuso) with thallium! Victor had promised Adam before he left that he would get to the bottom of it and clear his name. Viewers of The Young and The Restless have noticed a trend in Victoria towards ruthlessness and hostility – she is definitely not the Victoria that longtime viewers had grown to love in the past.

Victor will talk to Nikki after Locke has been attended to, and talk to her privately about the problems with Victoria. Nikki has noticed it too. She hasn’t agreed with a lot of decisions her daughter has made recently. Victor tells Nikki that Victoria had pointed out the bottle of rare scotch that none of them liked but kept for guests, and had noticed someone had been drinking it due to the emptier bottle. Nikki knows it couldn’t have been Faith Newman (Reylynn Caster), because she remembers the scotch being full the night Faith snuck out with the tequila!

Victor tells Nikki to keep his suspicions a secret, because they need to wait to see if Locke’s collapse was due to his heart or due to poison in the scotch, as well as the outcome for him. He thinks that Victoria may have poisoned the bottle of scotch targeting Adam, who she suspects Victor is hiding out on the ranch and didn’t believe him that he wasn’t. Nikki, naturally will be shocked at both Victor’s theory and the possibility that her daughter’s hatred had gone this far!