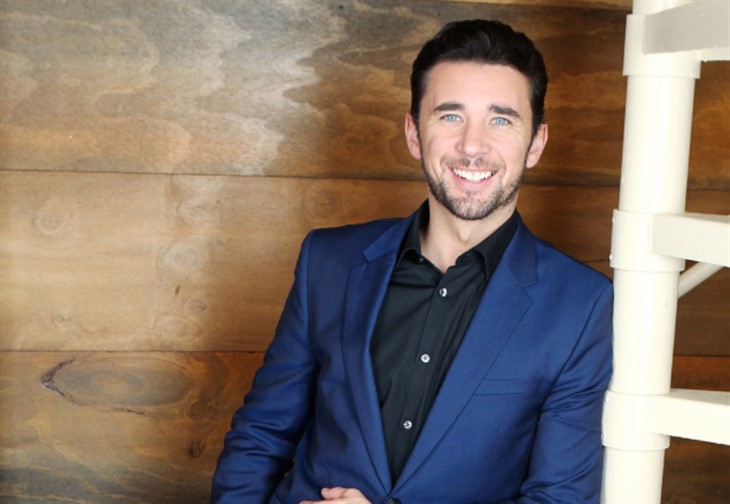 Days of Our Lives (DOOL) spoilers reveal that Chad DiMera (Billy Flynn) and Abigail DiMera (Marci Miller) were already having problems. Then Gwen Rizczech (Emily O’Brien) showed up, made things even worse, and is now pregnant. What does the future hold for “Chabby”? Flynn discussed the storyline and hinted at what is to come for the couple.

DOOL spoilers reveal that Abigail fails to convince Gwen to get an abortion. She puts the task on Chad because she feels that it would be best for everyone. However, Chad knows that he can’t force Gwen to terminate the pregnancy. He also knows that it’s immoral to try and manipulate a woman to make a certain decision because it would benefit him.

However, Abigail assumes that this means Chad’s choosing Gwen’s baby over his other children. Flynn makes it clear in his interview with Soap Opera Digest that Chad is not choosing Gwen or her baby. However, he has to still support the child he created during the one-night stand.

At one point, Gwen will mention love when they are discussing the pregnancy. Chad quickly corrects Gwen. He tells her that there was no love when they created this baby. The only emotion that was involved was spite. So, it sounds like Gwen might have feelings or be developing them for Chad. However, Chad shoots her down quickly and makes it clear that he’s supporting the child and not her.

“Dealing with someone who has struggled with mental illness, over time, it’s almost forced him to make more moral decisions in situations like this.”

Even though Abigail is going off the rails right now, it sounds like Chad has no intention of leaving his wife. He loves her and their family. He considers this just another bump in the road that they will somehow overcome. However, that doesn’t mean it will be easy and what complicates matters is the mental illness.

“He’s been so overwhelmed and so forced into this position as a caretaker but I don’t think it suits him. Abigail is in a place where she’s so mad, and on top of the mental illness, she doesn’t know which way is up. But Chad understands that she doesn’t seem like herself, so if he just talks calmly and keeps things level, maybe she will see her way back.”

However, as anyone who has ever worked in mental illness knows, once someone starts spiraling, they usually continue until professionals step in. She either has stopped taking her medication or it needs an adjustment. Plus, Chad needs to remember this is how the alters began a few years ago… with a stressful situation that Abigail couldn’t deal with on her own. It’s just a matter of time before Abigail goes off the edge.