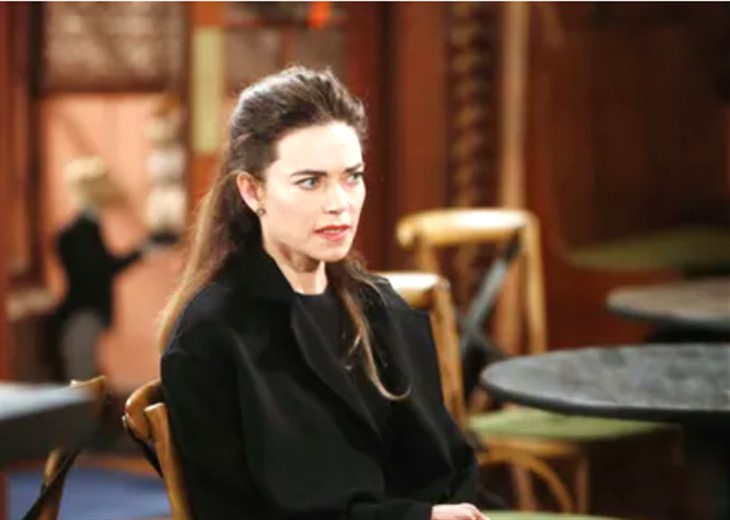 Viewers of The Young and The Restless will recall that Victoria had found herself looking longingly at photos of herself, Billy, and their children in her office at Newman Enterprises. Recently, she was disturbed to find out that Billy and Lily Winters (Christel Khalil) appeared to be getting serious, and Billy had brought their daughter Katie Newman (Sienna Mercury) to work and she had bonded with Lily!

Billy and Victoria had broken up over Billy’s increasingly erratic behavior and his hanging out with Amanda Sinclair, (Mishael Morgan) who at that time was a town pariah. They had been meeting at low class bars on the wrong side of town, and Victoria suspected an affair. Shortly after, at a celebration of the life of her father, Victor Newman (Eric Braeden) at the Top of The Towers, Amanda’s stalker, Ripley Turner (Christian Keyes) had seriously injured Victoria, mistaking her in the dimly lit room for Amanda from the back.

Victoria pretty much banned Billy from her life once she recovered – he wasn’t even invited to the hospital to visit her or to be informed of her progress, even though it was him who rushed to her side to render aid when she was stabbed! Her parents kept him away from the Newman ranch when she was out of the hospital and recuperating there; it has only been fairly recently that she has even been open to family outings together with the children.

Victoria decides to protect her interest by interference in Billy and Lily’s relationship – she no longer has Billy, so of course now she wants him back! She may make it a point to set up some business with ChancComm, for instance, to have an excuse to haunt him at his office and interfere in anything she notices he has going with Lily! She will start having her lunches at Society or anywhere else she notices Billy and Lily having gone for lunch, and arrange her schedule as closely as she can as so to interrupt them.

She may even use the children as an excuse to be with Billy, and set up more and more family outings that will hopefully drive him and Lily apart! It would seem that Victoria, once the victim of stalking herself by her ex-husband J.T. Hellstrom (Thad Luckinbill) and the unintended victim of Amanda’s stalker, could be considered a stalker herself! Victoria will continue to insinuate herself into Billy’s life, hopefully drawing his attention away from Lily and back to herself! She may do it in a way that neither Billy or realizes exactly what is going on at first, but Lily will become increasingly annoyed by the time Victoria demands of Billy that should be going to her!