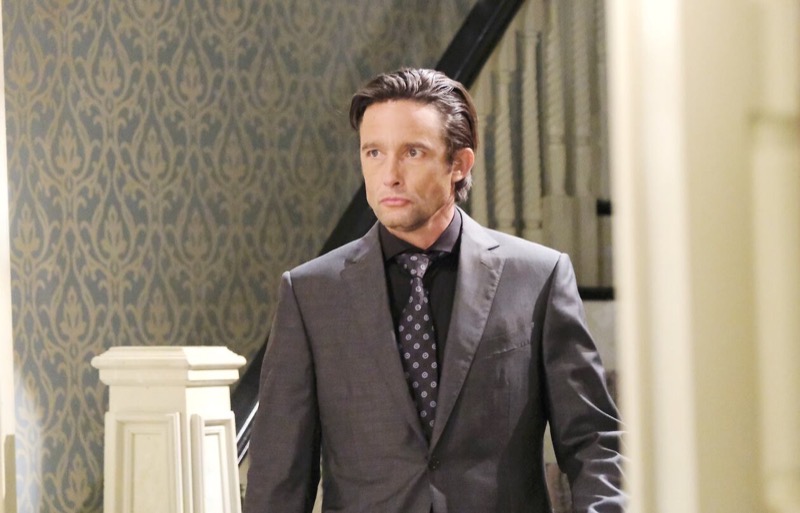 Days of Our Lives (DOOL) spoilers reveal that in Salem Brady Black (Eric Martsolf) gets shot when he is mistaken for Philip Kiriakis (Jay Kenneth Johnson). Despite being the one the mob is after, Philip keeps it a secret. Victor Kiriakis (John Aniston) will learn the truth and scrambles to do damage control to protect his family. Expect Philip to face harsh consequences, both legally and personally.

DOOL spoilers reveal that Philip is in hot water. Chloe Lane (Nadia Bjorlin) actually thinks she can protect him from the mob. She will realize just how wrong she is when Brady ends up getting shot. It is a matter of mistaken identity, as the mobster meant to kill Philip. Despite knowing that Brady was shot because of him, the Kiriakis heir doesn’t say anything or ask the police for help. He doesn’t even admit to his father what’s really going on. He just stays quiet and hopes his problem will magically disappear.

After everyone finds out that Brady was shot and might not survive, Xander Kiriakis (Paul Telfer) connects the dots. Xander is actually the reason why the mob has come to Salem to murder Philip. However, it’s not clear if Xander really grasps that he made the problem much worse. He will go to Victor and inform him of Philip’s deal with the mob and was using Titan for a money-laundering scheme. Victor’s head will be spinning over Philip’s extreme measures and deceitful actions.

He will also be horrified that Philip didn’t come forward after Brady took a bullet for him. At the same time, Victor will also be deeply disappointed. He doesn’t understand why Philip didn’t come to him if he was in trouble. He would give up every last cent if it meant saving his son’s life. He also is heartbroken that their relationship is still fractured. He genuinely believed that he had his son back.

Days of Our Lives spoilers reveal that Victor knows the mob will keep trying to kill Philip. Other people could also be in grave danger. Victor will do what he does best and fix his son’s mess. He has connections that can help him arrange a settlement with the Vitali family. After he is assured that Philip and the rest of his family will be unharmed, Victor will have to decide what to do next.

Even though Philip does regret getting mixed up with the mob and using his father’s company, there will still be consequences. Victor realizes that he can’t let Philip get away without some sort of punishment. He won’t disown Philip, but he will teach his son that his actions are inexcusable. With this being said, we have faith that Victor and Philip will really sit down and talk about everything. It will be healing for both of them and we predict their father/son relationship will not only be repaired,d but stronger than ever.