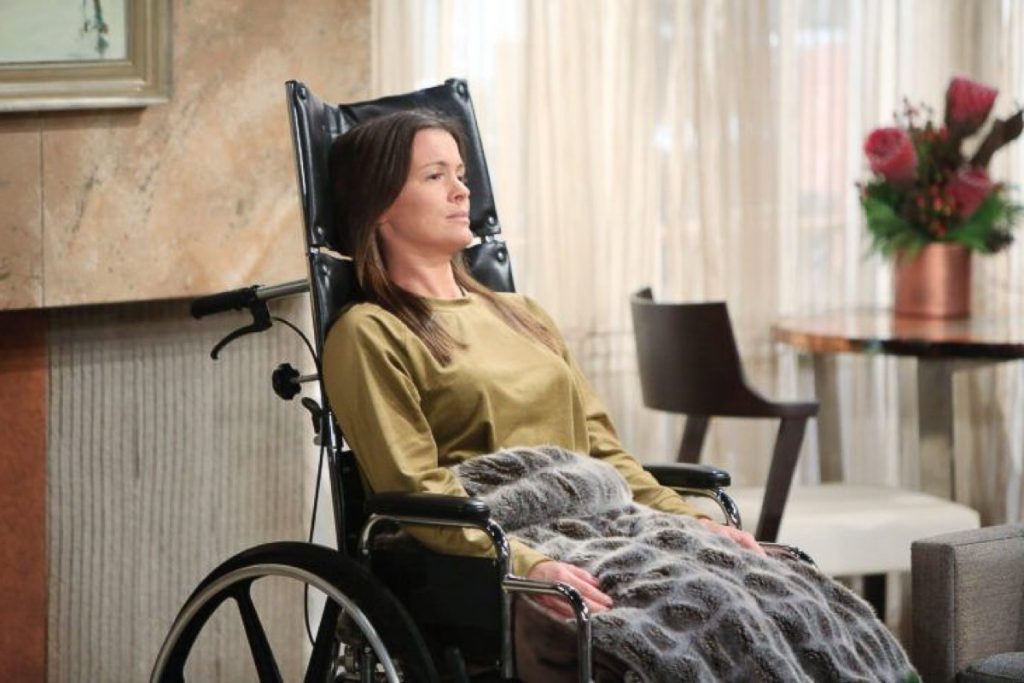 The Young and The Restless (Y&R) spoilers tease that in Genoa City, Wisconsin Chelsea Lawson (Melissa Claire Egan) will have another nightmare about Adam Newman (Mark Grossman) and Sharon Rosales (Sharon Case) in an upcoming episode of The Young and The Restless; and she will move her finger. The question is, might she feign lack of improvement in order to spy on Adam?

The Young And The Restless Spoilers – Chelsea Lawson Has Plenty To Say About Adam Newman And Sharon Rosales’ Bond But Cannot Say It!

Viewers of The Young and The Restless will remember from last week that Chelsea was very upset by Adam and Sharon’s continuing bond. Sharon had come to Adam’s penthouse to see how he was doing, but obviously didn’t realize Chelsea was there. Chelsea’s home care nurse wheeled her into the living room where Sharon and Adam were talking, and Chelsea wanted Sharon to leave! Adam kept telling Sharon she was welcome, and telling Chelsea that Sharon was there out of concern for her, but Chelsea wasn’t buying it.

As she shouted at Sharon to get out and at Adam that she didn’t want her there in her head, finally Sharon picked up on some nonverbal communication of Chelsea’s and left on her own. Afterwards, Adam heard Chelsea make a loud grunt type moan and he was thrilled that she made a sound! But, unfortunately for Chelsea, he didn’t get the message that she was trying to convey!

Viewers will recall that this is the result of the stroke she suffered when her brain aneurysm burst, she cannot speak and she is paralyzed on one side, likely the side with her writing hand so she cannot write either. Chelsea is literally trapped in her own body! It will take many months of therapy and relearning for her to be able to speak and do things for herself on her own.

Chelsea is extremely worked up over Adam and Sharon’s continuing bond; even her marriage to Rey Rosales (Jordi Vilasuso) isn’t keeping her away from Adam! Chelsea stews in her own juices and feels helpless but determines that she will not be helpless much longer! After she falls into another fitful sleep, she has a nightmare about Adam and Sharon fooling around behind her back, or perhaps even right in front of her face, assuming that she cannot understand what is happening right in front of her!

Possibly as she wakes, wanting to make a fist, she finds she can move a finger. This is a very good sign medically, and one that has not been expected by the medical specialists that have been overseeing her case. It gives her more determination to overcome her physical challenges and she sets her mind to working harder than ever to get her speech and movements back.

It also gives her determination to break the bond that Adam and Sharon continue to feed forever! She also decides that she doesn’t want Adam to necessarily know how much she is improving, and that way if her worst fears, that have surfaced in her worst nightmares start coming true, she can strike back in a way that will put fear into his heart! She wants more than anything to see their son Connor Newman (Judah Mackey) and proceed with their plans but she knows their family plans including Adam will never happen as long as Sharon is in the way and Adam is falling for it! Imagine Adam’s reaction when she suddenly shouts a litany of accusations at him that he had no idea she knew were happening!

General Hospital (GH) Spoilers: Nina Has Regrets, Blames Herself For Not Being A Positive Influence On Nelle