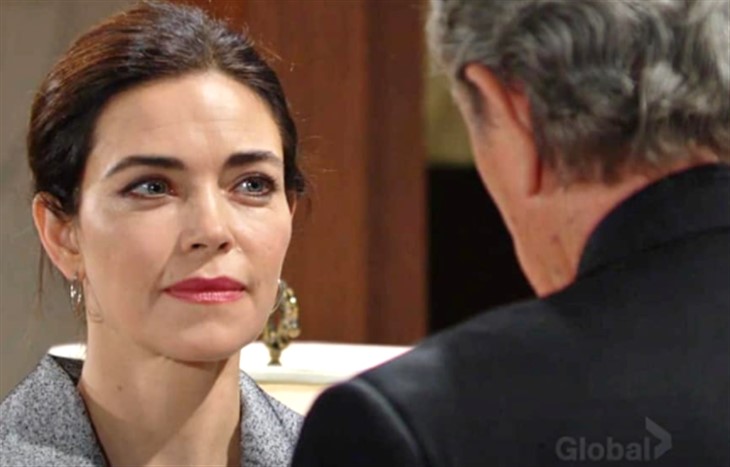 The Young and the Restless (Y&R) spoilers for Thursday, July 1, 2021, reveals in Genoa City, Wisconsin Victor getting wind of some changes Victoria wants to make.

Victoria (Amelia Heinle) made it clear last year when she blackmailed Victor (Eric Braeden) into making her CEO of Newman Enterprises that she was her own woman now and would do whatever she wanted. Now, Victor suspects that her closeness to Ashland Locke (Richard Burgi) is about to take the company he built from the ground up and destroy it.

Victor confronts his daughter on Thursday and demands to know exactly what she’s been up to but she is not about to tell him. Not when Ashland has taken her into his confidence with something so personal, right? Or could Victoria be playing both men and be getting ready to make her own power move?

Despite Jack (Peter Bergman) making it clear to her that they have no future together, Sally (Courtney Hope) is relentless. She thinks she can still win Jack over with her apologies and her determination to be a better person. Never mind that she’s the one who orchestrated the scheme to get Summer (Hunter King) out of Genoa City.

Still, Jack rejects the young woman because learning how she blackmailed Kyle (Michael Mealor) was enough to send him all the red flags about the redhead that he needed. He once again tries to make it clear that there will never be a future between them, but will Sally ever learn to take no for an answer?

Speaking of redheads, Mariah (Camryn Grimes) has a very awkward moment that she won’t soon forget. She is quite pregnant with Abby (Melissa Ordway) and Devon’s (Bryton James) baby, so awkward is something she is used to of late. Will this moment lead to anything consequential about her own life, or just Abby’s life? It sometimes looks like Mariah’s feelings are the last to come into play with this plot. Maybe it will be Tessa (Cait Fairbanks) who decides to do something about that problem. Stay tuned to The Young and the Restless weekdays to see how these stories play out.