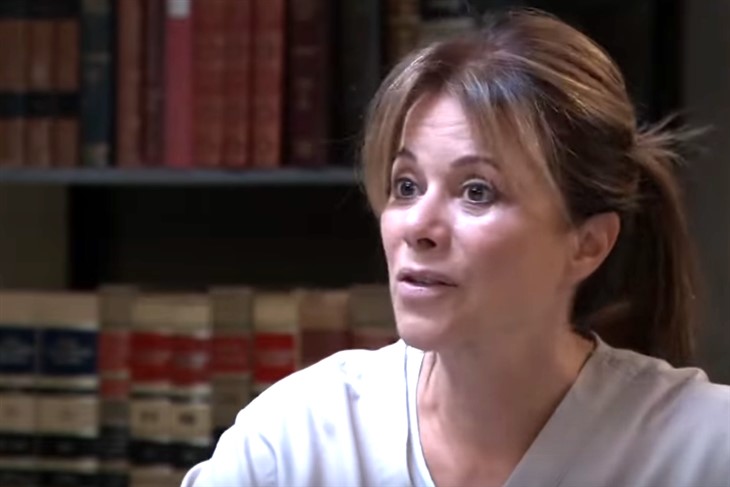 General Hospital (GH) spoilers tease that Alexis Davis (Nancy Lee Grahn) will struggle in solitary confinement, possibly with a broken wrist or worse, in an upcoming episode of General Hospital!

General Hospital viewers will recall that Alexis has osteoporosis – which means she can suffer a broken bone much easier than people who do not have osteoporosis. General Hospital viewers will recall that she had suffered a fall in her home, and had a sore wrist which she had bandaged up but had not sought medical attention for until her loved ones forced her to do so.

That is when Alexis got her diagnosis of osteoporosis. When a person has osteoporosis, it also causes chronic pain issues that are not easily remedied, because the calcium leaches out from a person’s bones and causes them to become weak. Chronic pain issues are one thing that Alexis doesn’t need as she continues to try and stay in recovery from alcoholism – she doesn’t need to have a pain pill addiction as well. Unfortunately, many chronic pain sufferers do become addicted to pain pills, and that habit can be even tougher to kick than alcoholism.

The last thing that Alexis needed, especially in Pentonville Prison, is another hard fall, and especially not on the broken wrist that she had just recently healed from. However, in a recent episode of General Hospital, Alexis may have suffered another break to the same wrist, and possibly worse injuries, as the prison warden and several guards descended upon her and Shawn Butler (Sean Blakemore) in the prison library!

General Hospital viewers will remember from recent General Hospital episodes that Alexis had been helping Shawn with his parole hearing. His parole was denied in spite of her efforts, and any efforts towards his being acquitted may not be possible since he had taken a plea bargain. Shawn and Alexis saw proof that Judge Naomi Carson (Anita Finlay) had a definite bias towards people of color when they studied her track record of convictions. Alexis wanted to pull the race card to try again to get Shawn freed from prison, and he had told her to drop it.

He was afraid of untoward consequences for TJ Ashford (Tajh Bellow) on the outside. In the meantime, Judge Carson had gone over to Kelly’s to pick up some lunch and saw TJ on a lunch date with Molly Lansing-Davis (Haley Pullos) who she recognized as Alexis’ daughter. There was a definite cause and effect as it was shortly afterwards that Alexis and Shawn were removed from the prison library, and from each other. One of the guards pushed Alexis down on the floor of the library hard, and she landed on her wrist. Alexis was holding her wrist as she was rudely hustled down the hall to solitary!

Once in solitary, the pain will start to hit her really bad. Most of the time a cell in solitary confinement is even more uncomfortable than a regular cell. It is meant for punishment which means no fluff, no perks, and often no privacy. There is a toilet with no privacy curtain or screen, and a hard cot with no sheets or pillows. No magazines or anything else for a person to pass the time are allowed, and all privileges including commissary or infirmary privileges are allowed.

There is no contact with anyone else except perhaps the guard who comes very occasionally to bring mandatory meals. The way Alexis was pushed down by the guard on the prison floor, likely concrete even in the library; it could have caused her more serious injuries than a re-broken wrist! Even if it only broke her wrist, the bones could have broken all the way through and be piercing soft tissues inside, and there will be no medical attention in solitary confinement!