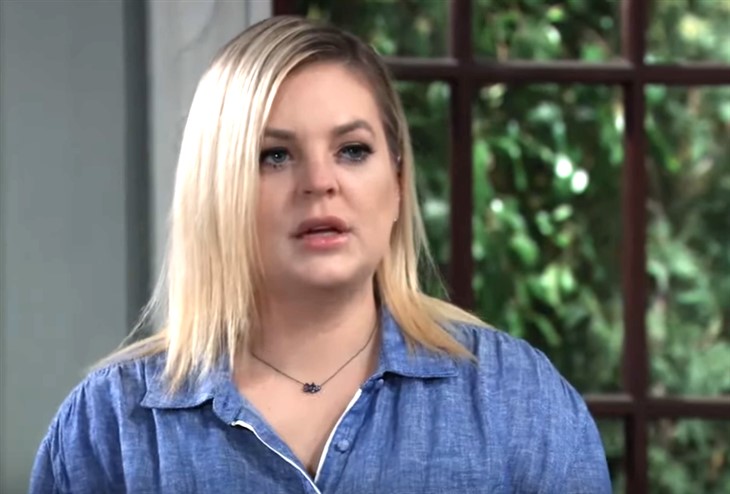 General Hospital (GH) spoilers and updates tease that Maxie Jones (Kirsten Storms) is packing her bags and will soon be leaving Port Charles to visit her family in Texas. Is she leaving for good?

Fans know that the new mom is struggling with her current predicament. She’s so close to the baby but she still can’t be with her. The baby is safe at the hands of Brook Lynn Quartermaine (Amanda Setton) and Valentin Cassadine (James Patrick Stuart) but it’s hard for her to stay away from baby Louise August (Harper and Scarlett Bloom).

To fill the hole, Maxie visits “Bailey” all the time. However, it seems like Maxie is starting to lose her grip. Even Monica Quartermaine thought the same because Maxie can’t stay away from Brook’s baby. Unfortunately, Monica has no clue Bailey is Maxie’s child.

Maxie eventually realized that she’s just putting her daughter at risk so she has decided to leave town. Her departure will allow her portrayer, Kirsten Storms, to recover since she has just gone through brain surgery.

GH Spoilers – When Will Maxie Return?

Storms had a cyst, which split into two, removed from her brain. The cyst was causing health problems and she went under the knife. The surgery was successful and the actress is feeling better than before. The question now is how long before she returns to General Hospital?

The actress went through the operation back in June. She may be feeling better now but she’ll probably need a few more weeks or longer to fully recover.

Upcoming scenes tease that Gatlin Holt (Roger Howarth) may use Maxie’s secret about her baby to blackmail Brook Lyn so he could get his hands on ELQ shares and Quartermaine recognition.

Viewers know that Austin may figure out that “Bailey Quartermaine” is actually Louise August (Harper and Scarlett Bloom), the daughter of Maxie. Austin wants to contest the will of Edward Quartermaine (John Ingle) and he believes he should get what he’s owed. He wants to get a seat at the Quartermaine table and he may be willing to do whatever he can to get it. He may find a way to get everything he wants if he uncovers Brook Lynn’s and Maxie’s secret.