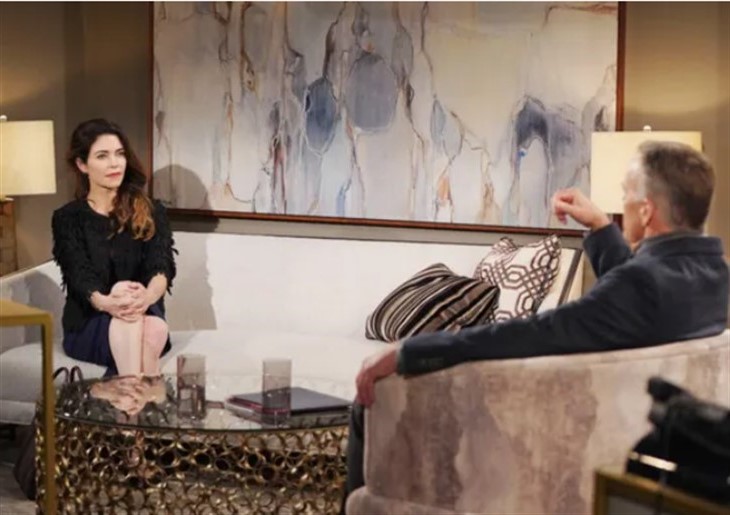 The Young and the Restless (Y&R) spoilers reveal that Bill Abbott (Jason Thompson) moved on with Lily Winters (Christel Khalil). They even just moved into a new place together. However, that is usually when things fall apart. Billy seems worried about Victoria Newman (Amelia Heinle) getting involved with Ashland Locke (Richard Burgi). However, could it actually be jealousy?

The Young And The Restless Spoilers – Victoria Newman’s Loneliness

Y&R spoilers reveal that for a while there, the soap focused on how lonely Victoria was. She even filmed video diaries where she talked about it. It was clear that she wanted someone in her life, but most fans don’t believe that person should be Billy. Besides, he had moved on with Lily. So, with Ashland showing an interest in Victoria, there seems to be a new spring in her step and she’s even blushing on the phone.

Meanwhile, it has already been teased that Billy and Lily’s relationship might not survive. The two seem to do well in business together as long as Billy is honest and upfront about everything. However, as far as their relationship goes, they seem to be on different pages. A relationship can’t survive on passion alone. Some fans predict that Billy will cross the line and Lily will get fed up with saving him or doing damage control.

The Young And The Restless Spoilers – Billy Abbott Worried About Ex

The Young and the Restless spoilers reveal that during a recent episode, Billy and Victoria were talking about Kyle Abbott’s (Michael Mealor) paternity bombshell and the latest article on Victor Newman (Eric Braeden). Victoria stepped away to take a phone call from Ashland. Afterward, Billy warned her to be careful, to which she replied that she will live her own life. He definitely seemed concerned and perhaps he should be. After all, Ashland has made a lot of waves since coming to Genoa City./

It is confirmed that Ashland and Victoria will be a couple this summer. However, that doesn’t mean that there won’t be complications or a love triangle. Is it possible that Billy’s worry could actually be jealousy? Would he try to chase after Victoria claiming that he’s just trying to protect the mother of his children? How will Lily and Ashland react to Billy’s actions?

Some viewers are excited about Ashland and Victoria becoming the next power couple. However, others feel that Ashland is bad news and Victoria might just be collateral damage. Then, there are those who are convinced that Ashland is abusive, although Tara Locke (Elizabeth Leiner) has denied her husband ever being violent. We will have to keep watching the CBS soap to find out what happens next.