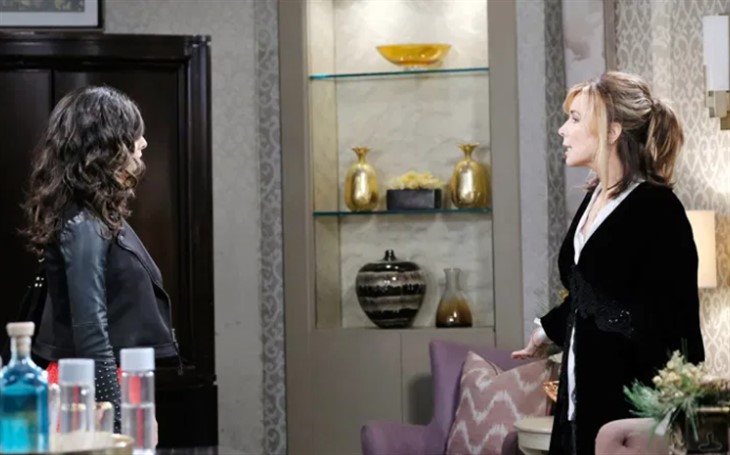 Days of Our Lives spoilers tease that Gabi Hernandez (Camila Banus) and Kate Roberts (Lauren Koslow) will fight over Jake DiMera (Brandon Barash) in an upcoming episode of Days of Our Lives!

Days of Our Lives viewers will recall that when Kate escaped Kristen DiMera’s (Stacy Haiduk) grasp, she was in very rough shape. Kristen had imprisoned her in the DiMera wine cellar for several days after knocking her out and then had stuffed her into a duffel bag, intending to ship her to a Greek island. It was likely the same Greek island as she shipped an unconscious and drugged Sarah Horton (Linsey Godfrey) to. Kate, too, had been heavily drugged, but she managed to wiggle her way out of the duffel bag as Kristen was hotly pedaling it out of town.

This, as Days of Our Lives viewers will recall, is what caused Brady Black (Eric Martsolf) to crash. Kate jumped out of Kristen’s car as it was moving, laid unconscious for a while, and then made her way painfully to the DiMera mansion. That was nothing compared to the emotional pain she must have felt when she finally made it to Jake’s and her room and found him in bed with Gabi! Yes, it had been Kristen impersonating Jake who dumped him, but to go straight to Gabi?

That only added insult to injury, even though previous to her being kidnapped by Kristen Jake had admitted he was still attracted to Gabi even though he had been involved with Kate for months! Then, of course, Kate collapsed and Jake called the ambulance to take her to Salem University Hospital. When she awakened in the hospital, she determined to pay both Jake and Gabi back for their betrayal.

Longtime Days of Our Lives viewers will recall that Kate and Gabi used to be friends, although the term “frenemies” may describe their relationship better. Gabi, after all, has a child with Kate’s grandson Will Horton (Chandler Massey) and at one time Kate had invited Gabi and Arianna Horton (Sydney Brower) after having been in a short relationship with her older brother, Rafe Hernandez (Galen Gering).

So, there have been times that Kate and Gabi have been kind of extended family. Kate and Gabi had enough of that extended family relationship at one time for Kate to be hurt that Gabi jumped back in with Jake so soon after he thought he’d been dumped, and even more so when she has heard them carry on in her hospital room! Kate, after all, woke up from her short coma a lot sooner than Jake and Gabi thought she had, so she knows exactly what has been going on!

Days of Our Lives viewers will recall that Gabi honed in on Jake, even jumping over his desk and trying to pull him into a sexcapade the minute she got back from Mexico! It’s not that Jake went back with Gabi that hurt Kate so bad, it’s the timing. It wasn’t a time single and then rebounding, it was immediate! Kate doesn’t even care about keeping Jake anymore after she realized he was such a snake, but she is not about to let either Gabi or Jake know that. She’s even playing blind and amnesiac, but Kate hasn’t forgotten anything. So when she gets in a confrontation with Gabi over Jake, a real catfight ensues and Kate plays it to win! Gabi may not know what hit her!