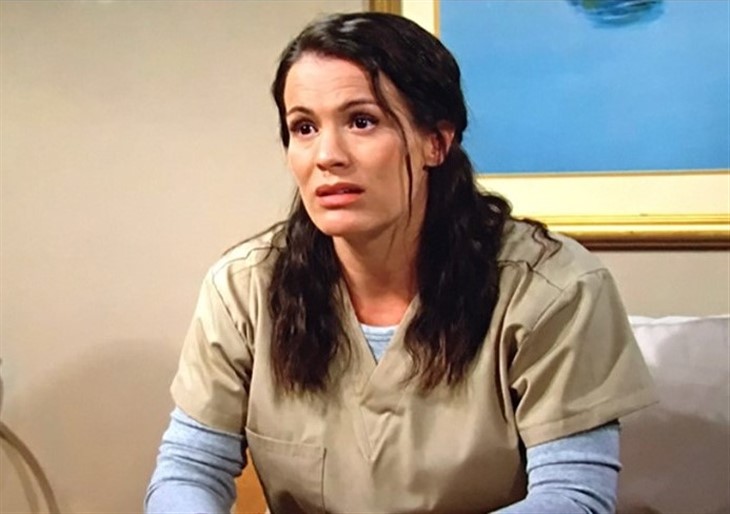 The Young and the Restless spoilers reveal that Chelsea Lawson (Melissa Claire Egan) becomes furious that she can’t see her son. She contemplates escaping but what happens if she actually breaks out of the psychiatric facility? Could she try kidnapping Connor Newman (Judah Mackey) and try to get permanent justice? This could quickly spiral out of control.

The Young And The Restless Spoilers – Adam Newman’s Decision

Y&R spoilers reveal that Chelsea might have been faking her breakdown. Now that she is actually in a psychiatric facility, she seems to actually be losing her mind. Rey Rosales (Jordi Vilasuso) plays games with Chelsea in order to find out who else was helping her. Meanwhile, Adam Newman (Mark Grossman) comes in and makes a point to protect Chelsea.

Then, the two talk,s and Chelsea demands to see her son. However, Adam doesn’t think it’s a good idea until she is better. This decision makes her enraged and she wonders if she’ll ever see Connor again.

Rey ends up meeting with Chloe Mitchell (Elizabeth Hendrickson) and tells her that Chelsea could use a friend. When Chloe meets with Chelsea, they both update each other on what’s been happening in both of their worlds. Chloe mentions Adam’s business offer and Chelsea assumes her friend would automatically say no. However, when she reveals that she said yes and explains why Chelsea thinks that everyone else has gone crazy and she’s the only sane one left.

The Young And The Restless Spoilers – Chelsea Lawson Considers Escaping

The Young and the Restless spoilers reveal that Chelsea considers escaping. Knowing her, she will probably find a way to do it. However, she is clearly losing her sanity more and more. So, what will she do if and when she escapes the psychiatric hospital? We know that Chelsea’s relationship with her son is the most important thing to her. So, we imagine that is who she will go to first. However, Chelsea also might have some more sinister plans for the other people she feels have wronged her.

The list of people that Chelsea blames keeps growing. First and foremost, she wants Adam to pay. She might also go after Sharon Rosales (Sharon Case). Fans might recall when Chelsea said that Sharon would have to pay the price. We don’t think she’s given up on that despite Rey telling her about their second honeymoon plans.

Then, there is Victor Newman (Eric Braeden), who coerced Chelsea into confessing and arranged for her to be admitted to the mental hospital. She also thinks that Victor did something with Connor, even though the boy was safely at school at the time. We can see this situation quickly spiraling out of control. Just how will this storyline end and could there be casualties?