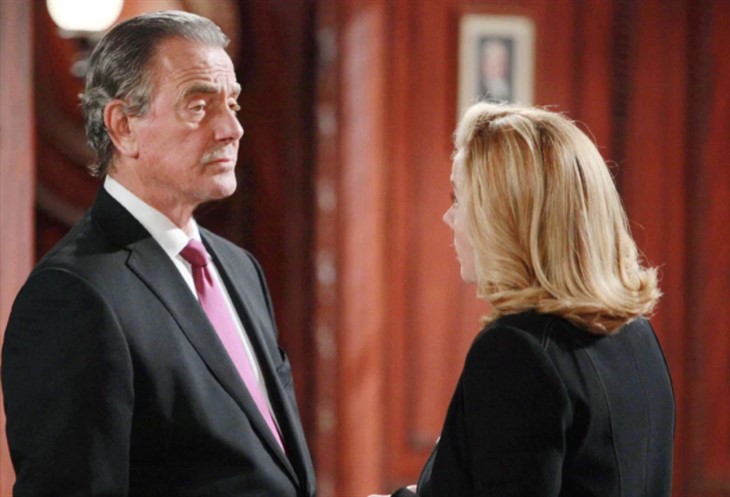 The Young and the Restless (Y&R) spoilers for Tuesday, April 27, 2021, reveal Nikki taking charge after Victor did a bad, bad thing. Also, Amanda’s job for her family might prove to be too much for her.

Victor (Eric Braeden) did a typical soap move when he allowed Ashland Locke (Richard Burgi) to remain near death’s door right on his couch. Victor watched the man clutching his chest, barely able to breathe, and didn’t even get him help. Instead, he made him sign business papers before Victor would do the right thing — or at least what most people would consider the right thing.

Now, it looks like Victor might have to pay for his actions, but not if Nikki (Melody Thomas Scott) has anything to say about it. She tells a few fibs for her husband and covers for him, but she has to be used to that now after all these many decades.

Nick Newman (Joshua Morrow) and Phyllis Summers (Michelle Stafford) have been arguing of late, especially over their adult daughter, Summer (Hunter King). But on Tuesday, they seem to make up in the bedroom where they have quite a romantic night. Will this night also involve video games? They rarely bond over anything as well as they bond over game controllers. Of course, this will all be happening at The Grand Phoenix since half the town seems to live in a hotel room.

The Young And The Restless Spoilers  – Is Amanda In Too Deep?

Imani (Leigh-Ann Rose) did warn Amanda (Mishael Morgan) to stay away from her family. In fact, she even took out a restraining order to get her to do so. Perhaps this was actually a warning to her half-sister that staying away was the best thing she could do for herself.

Now that Amanda is working for the family, she is discovering things she never expected and learning her grandfather isn’t as innocent as she believed him to be. What will Amanda do if she finds evidence she doesn’t like? Stay tuned to The Young and the Restless weekdays to see how these stories play out.