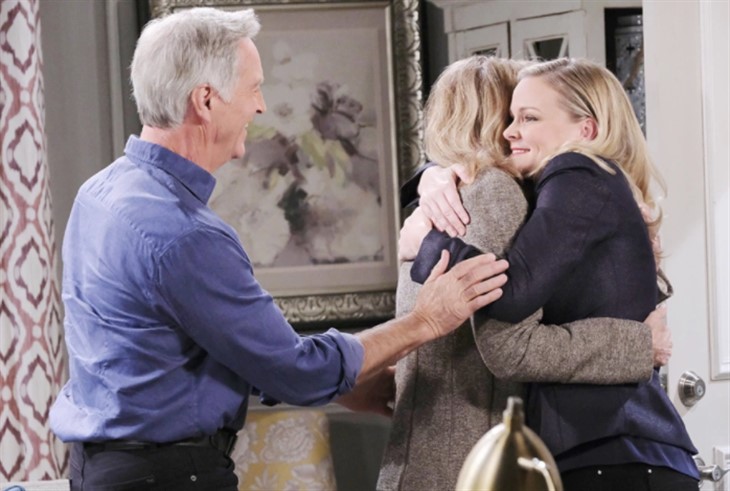 John (Drake Hogestyn) remembers seeing Belle (Martha Madison) shoot Charlie (Mike Manning), but he also only remembers seeing the back of her head. Rafe (Galen Gering) has the button from Belle’s coat in his evidence pile–a button he found at the scene of the crime. So, he had no choice but to arrest her.

But John and Belle know she didn’t pull the trigger and the audience knows it was Jan Spears (Heather Lindell) who did. Father and daughter work together, pooling together all they know about Charlie’s murder and try to clear Belle’s name and find the real killer. Will they be led straight to Jan?

DOOL Spoilers – Jan Spears Has More Trouble Than She Bargained For

Speaking of Jan, she runs into Nicole (Arianne Zucker), who is not a person she wants to see. Aside from their long-ago past that landed Jan in a years-long coma, Jan also testified against Nicole last year when she was trying to win custody of Henry. The two women spar but Nicole might have something else to worry about.

It was Nicole’s idea for Ava (Tamara Braun) to move in with Rafe but she didn’t expect them to grow close. Rafe was Nicole’s friend first. But this pair has bonded and the time they have spent together talking about Charlie brings them even closer and leads to quite a kiss. Now, how will Nicole feel about that turn of developments?

Ben (Robert Scott Wilson) is distraught at the idea of Ciara (Victoria Konefal) leaving town and moving to South Africa with Theo (Cameron Johnson). He can’t believe he found her just to lose her again because she has no memory of their time together, but he’s not about to give up just yet.

He heads to the hospital to give the old college a try once again and beg Ciara to stay. He hopes to jog her memory with more stories of their life together, but will it work. Stay tuned to Days of Our Lives weekdays to see how these stories play out.