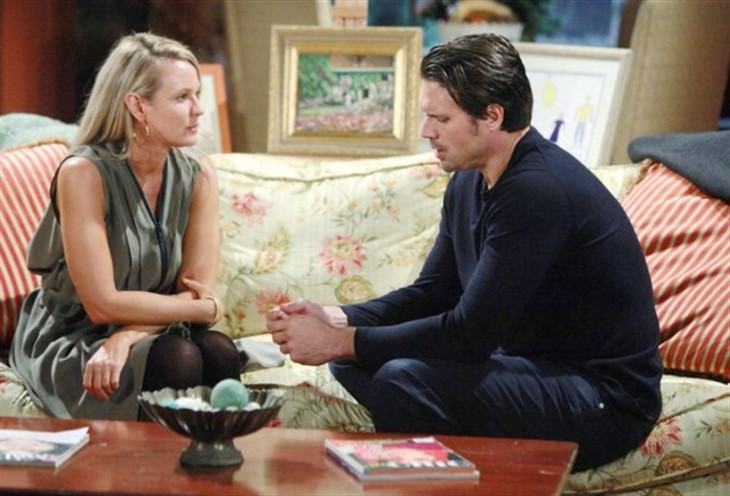 The Young and the Restless (Y&R) spoilers for Tuesday, May 4, 2021, reveal Nick doing his best to find Adam, but Mother Nature seems to have other ideas.

If you’re going to search for the wayward brother you hate on a Kansas farm, you better expect a twister to rear its ugly head. That’s exactly what happens to Nick (Joshua Morrow) when he tracks down Adam (Mark Grossman) at the Montalvo farmhouse and begs him to return to Genoa City with him and help Faith (Reylynn Caster).

She needs a kidney and wouldn’t Adam do everything in his power for Connor if he needed a kidney and only Nick had a match? (What about Christian? Would Adam do the same for him? Why is he never mentioned in any of this or ever at all?)

Adam agrees to return to GC but then the tornado hits and Adam and Nick are trapped and must save one another before they can save Faith. The problem is, the men are separated and they have nobody to help either one of them. This will be a test between these two brothers as never seen before. Will Victor have to swoop in and end this mess?

Back in Genoa City, Sharon (Sharon Case) struggles to be strong for Faith and assure her that everything will be alright. Except that’s easier said than done when searching for Adam in Kansas during climate change when tornadoes are even more frequent.

But at least Rey (Jordi Vilasuso) is there for his wife for a change. He puts aside all the jealousy he has towards Adam and how close he is to Sharon to actually comfort his wife rather than telling her what to do all the time. And Sharon is appreciative of this. She needs someone near her as she waits to hear a word from Nick.

Nate (Sean Dominic) is telling her Faith’s condition is getting worse and they are running out of time and when she tries to reach Nick, she can’t. Sharon knows she can’t lose another daughter after losing Cassie (Camryn Grimes) all those years ago so Rey better learns how to be a better husband and fast before Sharon loses it.