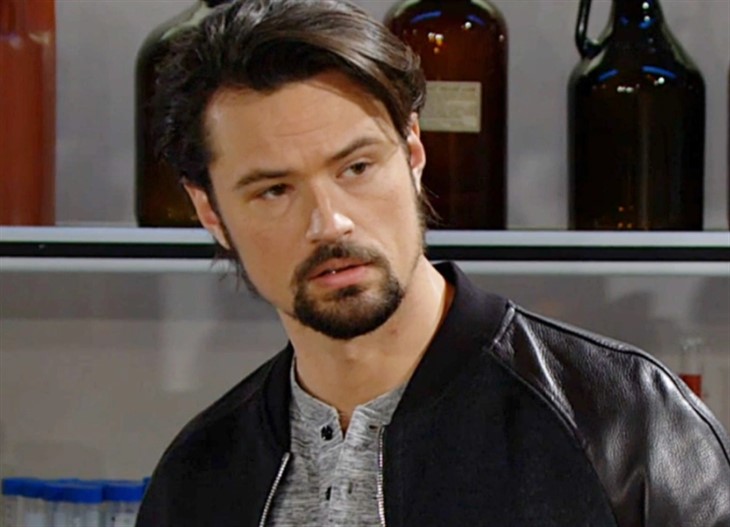 The Bold and the Beautiful (B&B) spoilers for Tuesday, May 4, 2021, reveal Ridge in shock when the cops come sniffing around about Thomas.

Ridge (Thoren Kaye) was there for Thomas (Matthew Atkinson) at Vinny’s (Joe LoCicero) memorial comforting his son over the loss of his best friend. Thomas was distraught and vowed to get to whoever hit Vinny and then left his dead body on the side of the road.

That’s why it’s stunning to Ridge when the cops come around to try and question Thomas. Maybe he knows more about what happened to Vinny than he’s letting on. Not only is Ridge stunned, but he’s defensive and assures the police in an angry way only Ridge can that Thomas had absolutely nothing to do with Vinny’s death.

Of course, maybe Ridge isn’t so sure of this. Maybe he should ask Thomas if he really does know more than he says. Maybe he didn’t have anything to do with Vinny’s death, but perhaps he knows more secrets related to Vinny than he’s telling. We’re sure Brooke (Katherine Kelly Lang) would certainly like to believe this. It would also make this story a little more interesting since we think we already know who killed Vinny.

Hope (Annika Noelle) is just so happy to have Liam (Scott Clifton) home so they can play house again. Nobody really ever has to go to work and they can just play with their kids whenever their kids aren’t napping. And surely Liam will never cheat on her again or keep any secrets. He has to have learned his lesson by this point. Oh, Hope, you’re so naive. When has Liam ever been faithful?

The Bold And The Beautiful Spoilers And Recap For Monday, May 3: Carter & Quinn Incredible Night – Ridge Consoles Thomas #bb #boldandbeautifulhttps://t.co/qgw4I2ILbi

Liam is an absolute basket case in front of Hope as usual, but Hope refuses to catch on to the fact that Liam might be hiding something. Maybe he is just hesitant she really hasn’t forgiven him for thinking a mannequin was her. Whatever it is, Hope is optimistic and she is sure everything will work out cause it just has to. Stay tuned to The Bold and the Beautiful weekdays to see how this all plays out.