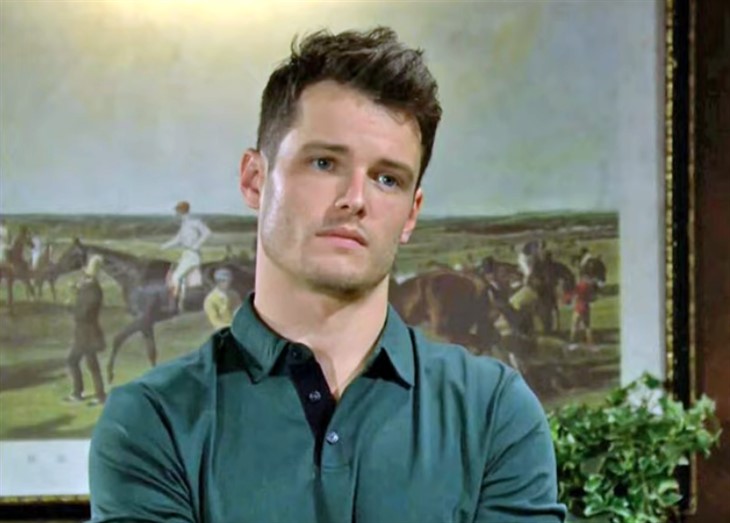 The Young and the Restless spoilers reveal that Kyle Abbott (Michael Mealor) makes a confession. He tells Jack Abbott (Peter Bergman) that he is scared to confront Tara Locke (Elizabeth Leiner). Kyle has seen Tara weaponize her son with Ashland Locke (Richard Burgi). The last thing he wants is to lose Harrison Locke (Kellen Enriquez) forever.

The Young And The Restless Spoilers – An Overheard Conversation

Y&R spoilers reveal that Kyle bonded with Harrison right away and the two have only gotten closer. Kyle jumped into instant fatherhood despite just finding out about Harrison. Now Kyle can’t imagine his life without the little boy. So, when he overheard Tara talking on the phone with Sally Spectra (Courtney Hope), his world began crumbling.

Under normal circumstances, Kyle would confront Tara about what he heard. This situation is a bit different, though. Ashland is listed on the birth certificate as Harrison’s legal father and has been raising the child since birth. The child support and custody agreement also indicate Ashland is the father. Even though there are legal loopholes in cases like these, Kyle really has no legal rights when it comes to the child.

The Young And The Restless Spoilers – Weaponizing Harrison Locke

The Young and the Restless spoilers reveal that Kyle has watched Tara deal with Ashland during the divorce. One of the tactics she uses is weaponizing Harrison. She uses the little boy to get what she wants from Ashland. She was ready to ask the court for sole custody after Ashland lost his temper over time with Harrison. Even though Ashland has been given months to live, Tara didn’t hesitate to cut what little visitation time he has left. She also never bothered to consider how this would affect Harrison.

Kyle admits to Jack that he’s afraid to confront Tara. If she would tear her son away from a dying man, she would do the same to Kyle. Understanding her tactics and knowing he has no legal claim to Harrison complicates the situation. According to the new issue of Soap Opera Digest, Kyle tells Jack that any confrontation could lead to him never seeing Harrison again.

As Jack and Kyle try to figure out Tara’s true intentions, there will be difficult decisions to make. Kyle can’t stay quiet forever, especially since he still thinks about Summer Newman (Hunter King) each day. He needs to find out if Summer left because of Tara and Sally. By the end of next week, Kyle will contact his former flame. Then, he decides to make a bold move. What will be the result of his actions, though? We will have to keep watching the CBS soap to find out what happens next with this storyline.