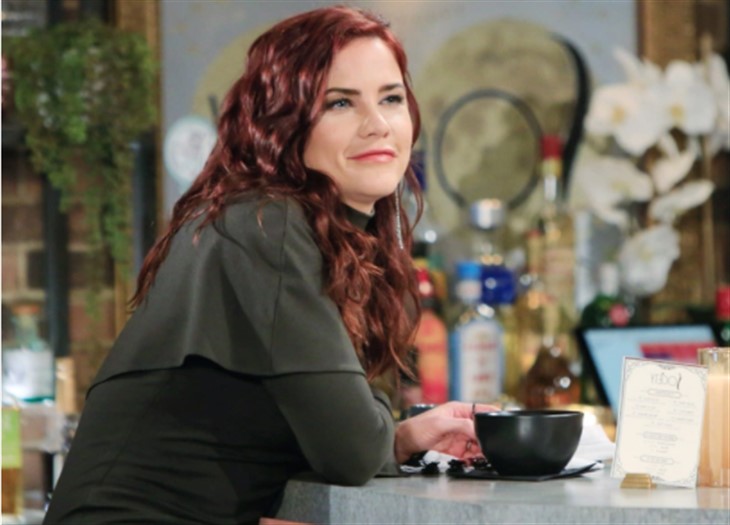 The Young and the Restless (Y&R) spoilers document that in Genoa City, Wisconsin Sally Spectra (Courtney Hope) will make a tactical decision. Faced with the threat of Summer Newman’s (Hunter King) intel, Sally will opt to target Kyle Abbott (Michael Mealor) through psychological warfare, in part.

Devoted Y&R fans know that Kyle has a somewhat checkered past. His time in New York with Theo Vanderway (Tyler Johnson) is ripe for the picking. The Kola divorce is a sore subject as well, unless some additional unknown drama will be identified and used by Sally.

The photo Summer intentionally posted on one of her social media feeds was aimed directly at Sally. Let’s just say that she didn’t offer a comment on the image of Summer and Flo Fulton (Katrina Bowden) who were shown at Il Giardino.

Summer’s trip was intended to use a meeting with Spencer Publications as the cover for investigative research into Sally’s past on The Bold and the Beautiful. The unexpected meeting with Flo led to a number of revelations. Summer has come to believe that she has the goods on Sally, if they need to be used.

Flo pulled no punches with her one-time adversary and abductor. She told Summer about the faked terminal illness and the in effect kidnapping.

Sally chose to leave Los Angeles, California, because of what she’d done. She admitted her mistakes to Wyatt Spencer (Darin Brooks) and eventually crossed over to Genoa City, Wisconsin.

The evolving opportunity that Lauren Fenmore (Tracey Bregman) gave to Sally and the burgeoning friendship with Jack Abbott (Peter Bergman) are equally important. Sally does not want to allow Summer to marginalize progress that has been made, or to force her to leave GC. So, she will fight back while continuing to establish herself on Y&R.

The Young And The Restless Spoilers – Kyle Abbott Not Expecting Trouble

Kyle thinks that Summer’s efforts will help her, Jabot, and Fenmore’s. He’s not aware of how far Sally has been and will be willing to go.

So, whether Kyle’s bites in the Big Apple, relationship with Lola Rosales (Sasha Calle), or some other matter is used against him will soon be known. He’ll be the target, as an attempt to stop Summer’s push. Sally may not realize that antagonizing Jack in the process is a terrible move to make.