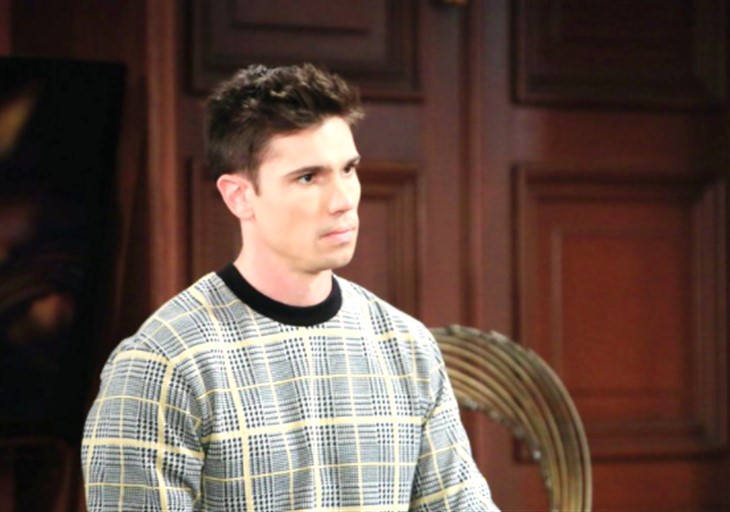 The Bold and The Beautiful (B&B) spoilers tease that in Los Angeles Dr. John “Finn” Finnegan (Tanner Novlan) may not be as honorable as he seems to be. Some fans of The Bold and The Beautiful think he’s just a little too perfect. Under pressure to keep Liam Spencer (Scott Clifton) from being such an intrusive presence in a life he wants to spend the rest of with Steffy Forrester, (Jacqueline Macinnes Wood) might he change the results of her paternity test to show him as the father, and not Liam?

As viewers will recall, the baby could be either Finn’s or Liam’s, because Steffy slept with both of them during the same time period, a few nights apart. Granted, she only slept with Liam that one time, but as everyone knows, one time is all it takes to conceive a baby! Finn wants it to be his and so does Steffy. They agreed in recent episodes of The Bold and The Beautiful that they wanted to spend the rest of their lives together in spite of this major hurdle of Steffy’s one-time infidelity. Some might say Finn loves Steffy too much, given her romantic history. Finn knows that Steffy planned to have a paternity test, and her ob-gyn, Dr. Campbell (Tina Huang) is based out of the same hospital he is.

Finn and Dr. Campbell may very well know one another, as Dr. Campbell looked shocked when Steffy requested her paternity test! She may be good enough friends with Finn that she knows that he’s involved with Steffy and that could be a reason for her shock! On the other hand, she may have been involved in the tests that proved Steffy’s adopted daughter Phoebe Forrester (River Davison) was really Beth Spencer (River Davison) and remember the case. Steffy was more a mark or a victim in that case than she was a participant, however. Viewers will recall that storyline, which culminated in little Douglas Forrester (Henry Joseph Samiri) recognizing baby Phoebe, named after Steffy’s late twin, as baby Beth, who Hope Logan (Annika Noelle) and Liam had been told died.

B&B Spoilers – It Would Be Easy For Dr. John Finnegan To Alter The Paternity Test Results

It would be easy for Finn to alter the paternity test results, but there would be a lot to consider before doing so. For one thing, there would need to be genetic testing to make sure that the baby couldn’t inherit medical conditions that could come from Liam, and not from Finn. Finn may know he doesn’t have any but he would have to research Liam’s medical history. If the baby turned out to be Liam’s, and could inherit a medical condition from him that Finn doesn’t have, the baby may not get the medical care that he or she would need should it be needed. For instance, sometimes babies inherit a hole in the heart from a parent that would need to be repaired so it wouldn’t cause trouble later on. If the baby’s medical records are faked because of the paternity test being faked, that could cause harm to the baby.

Finn would have to make sure none of those eventualities could happen before considering altering the paternity test. Besides, even if the baby is Liam’s and the test was faked, Finn might tell himself it wouldn’t matter and he’d love the child as his own, but in his subconscious the child could be a nagging reminder of Steffy’s infidelity! Bearing all that in mind, Finn may be tempted, but it is doubtful he would alter the paternity test – but with this being a soap, one never knows!