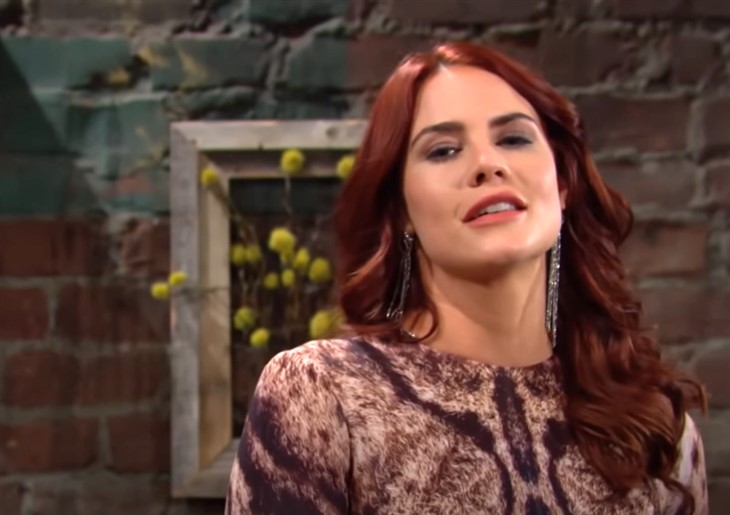 The Young and the Restless (Y&R) spoilers document that Sally Spectra (Courtney Hope) has concocted another self-righteous scheme. She’s asking Eric Forrester (John McCook) to hire Summer Newman (Hunter King) at Forrester Creations’ fashion house in Italy. The intent is to get Summer out of Genoa City, Wisconsin, with the goal of damaging or ending Skyle.

Sally’s grandmother, Shirley Spectra (Patrika Darbo), doesn’t offer grounded advice when asked. Sally has no significant other and what true friendships does she have to speak of? All factors cause Hope’s crossover character to run with whatever destructive idea pops into her head because she has no one to tell her no and enforce the stop.

The Young And The Restless Spoilers – Sally Spectra Scores A Promotion?

Sally has wanted Summer’s life since the moment she learned who Snowflake was. That old nickname is what Mariah Copeland (Camry Grimes) use to refer to Summer as before Y&R first devolved King’s character and later rebuilt her into an impressive adult.

So, Sally believes that Summer hasn’t earned anything. What people with Sally’s personality type refuse to recognize is that those from prominent families or those who build success on their own aren’t on glide paths in Life.

Summer, like many in GC, has benefited from the uplift her last name brings. But she also has to deal with powerful and petty enemies as well, which Sally and those like her refuse to admit. Childish jealousy is like that in the soapy world.

Unless King is leaving the cast again, Summer won’t be moving to Italy forever. However, if Sally’s devious plan is explored, then Summer might entertain the idea on a temporary basis. Of course, that would be dependent on current developments with Kyle Abbott (Michael Mealor), Tara Locke (Elizabeth Leiner), and their son, Harrison Locke (Kellen Enriquez).

Sally’s assertion to Ashland Locke (Richard Burgi), that Kyle will join Summer in Italy, is laughable. Ashland didn’t exactly accede to Sally’s wishes, by making a connection for her. Instead, he provided Eric’s contact phone number.

Of course, fans know that Sally and Eric are fully familiar with each other. Her pitch to him, which includes not telling Victor Newman (Eric Braeden), is a stretch. So, viewers will see if Summer’s planned trip to Italy happens.

The Young And The Restless Spoilers – Egg All Over Her Face, Again

Sally hasn’t learned anything since she left Los Angeles, California. She took advantage of Wyatt Spencer’s (Darin Books) friendship, by pretending to be dying. Kidnapping Flo Fulton (Katrina Bowden) was reactionary and should have resulted in Sally being put in jail.

The idea of forming a relationship with Jack Abbott (Peter Bergman) was real. But Sally sabotaged that potential as well.

The Italy plan feels like another fail, with Sally eventually having egg all over her face. She’ll blame others as she scrapes it off, seemingly unable to right herself.