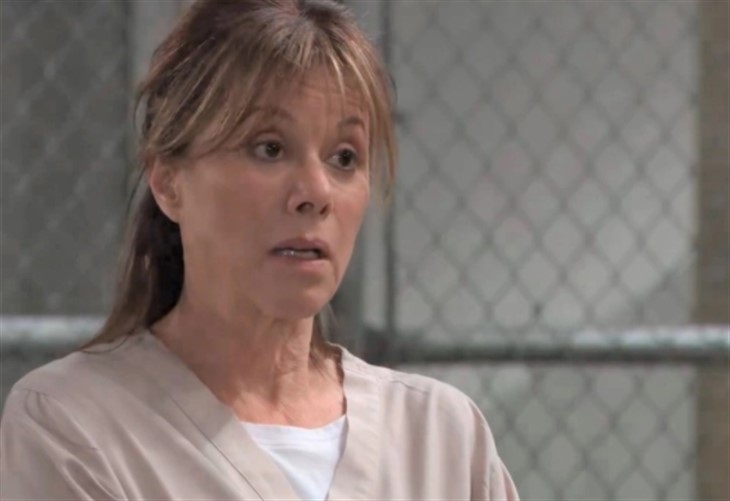 General Hospital (GH) spoilers tease that while in the library at Pentonville Prison, Alexis Davis (Nancy Lee Grahn) and Shawn Butler (Sean Blakemore) will make some rather unsettling discoveries about Hayden Barnes’ (Rebecca Budig) shooting in an upcoming episode of General Hospital. That was the shooting that Shawn has been doing time for that he didn’t do!

Longtime General Hospital viewers will remember the story of how Hayden was shot and went into a coma. Hayden had been living in Beechers’ Corners and claimed that Jake Doe (Billy Miller) was her missing husband. This was long before “Jake Doe” was revealed to be Jason Morgan’s (Steve Burton) long lost twin brother Drew Cain (Billy Miller). “Jake Doe” was still living with Elizabeth Baldwin, then Elizabeth Webber (Rebecca Herbst) at the time who believed he was Jason and was keeping his identity a secret. This was also long before Elizabeth and Hayden were revealed to be half-sisters.

It later turned out that Ric Lansing (Rick Hearst) Elizabeth’s ex-husband was working with Hayden. Ric had hoped to win Elizabeth back for himself, so of course “Jason” had to get out of the way. After Ric was out of the picture, busy seducing Nina Reeves (at that time Michelle Stafford, now Cynthia Watros) to get her money, working with her mother Madeline Reeves (Donna Mills) Hayden, still broke, struck out on her own blackmail scheme. She became aware of the filthy rich Nikolas Cassadine (now Marcus Coloma, then Tyler Christopher) and started blackmailing both him and Elizabeth with the fact that she knew Jake was really Jason.

At the same time, Sonny Corinthos (Maurice Benard) was had put a hit out on Jake, which Shawn, as his enforcer, was to carry out at the garage where Jake/Jason/really Drew was working. Sonny, too, had no idea that Jake was really “Jason”. Nikolas sent her over to the garage to tell “Jason” the truth, which he had no idea of either, having amnesia, with the intentions of having her killed. Nikolas sent his own hitman and that hitman was the one who shot Hayden, not Shawn.

General Hospital viewers will recall Sam McCall (Kelly Monaco) had also been in the garage at the time and Hayden managed to get out that she knew who Jake really was, or was thought to be at the time before she passed out. She also tried to tell Jake himself but had a seizure before she was able to. Dr. Patrick Drake (Jason Thompson) operated on her but she lapsed into a coma.

General Hospital viewers will recall that Alexis had been working on Shawn’s parole case, but Nikolas had paid someone off to deny his parole! General Hospital viewers know that in order to try and represent Shawn she would have to have access to his case files. Alexis wants badly to prove Shawn’s innocence, even though Shawn himself would have preferred to fulfill his entire sentence since he had pled guilty.

Shawn became very discouraged after they lost his parole case, but Alexis wants to start preparing for the next time his parole hearing comes up already. She may actually need the assistance of Sam, who is on the outside, possibly with her sister Molly Lansing-Davis (Haley Pullos) who is now working in the district attorney’s office. The District Attorney, of course, is now Robert Scorpio (Tristan Rogers). It would stand to reason that the bullet that was retrieved from Hayden’s head would not match Shawn’s gun that he used at the time, and that is probably what Alexis will want; the ballistics reports from the original case.

Alexis will need anything the police have that she can get her hands on to look for discrepancies in the original investigation. Getting Robert to have the case retried may or may not be an option since Shawn pled guilty, but it would certainly be worth a try! The unsettling discoveries that Alexis and Shawn may find when they obtain the complete Port Charles Police Department files may reveal that Nikolas had been in the area talking to someone at the time who was never called as a witness! It’s a long row to hoe, but Alexis is determined to set Shawn free!