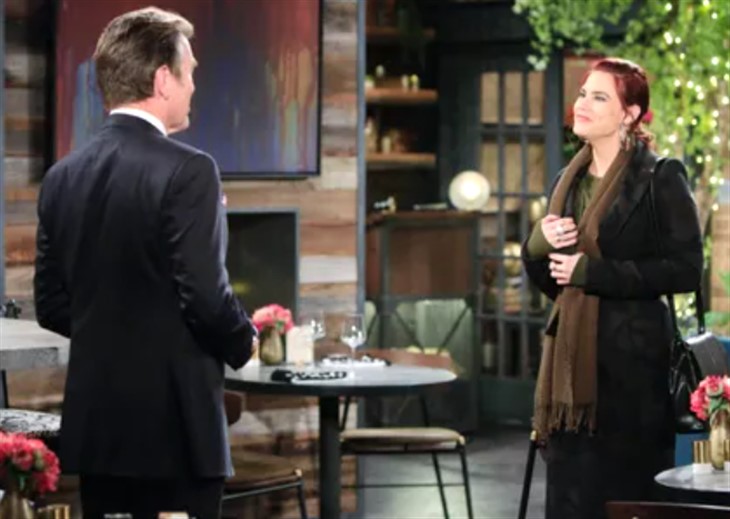 The Young and the Restless (Y&R) spoilers tease that our CSB source is spilling the dish on Jack Abbott (Peter Bergman) and Sally Spectra (Courtney Hope) and it is delicious! According to our insider, Jally is now being prepared to be served up piping hot in Genoa City, Wisconsin.

The Young And The Restless Spoilers – Sally Spectra Is Like Phyllis Newman?

Young and the Restless spoilers and recaps show Sally Spectra has set Genoa City on its ear in more ways than one. Her arrival has ushered in a scintillating baby daddy drama concerning Summer Newman (Hunter King) and Kyle Abbott (Michael Mealor). It has also sparked some espionage intrigue concerning her past. And, perhaps most incendiary, she is sniffing around town mogul Jack Abbott.

Jack doesn’t seem to mind Sally’s blatant attentions, in fact he’s back to being Smilin’ Jack most of the time. This has some Young and Restless fans cringing. Some think the age gap is a bit much and some just think Sally herself is a bit much—make that over the top.

It has been widely reported that Jack Abbott is set to have a long overdue romance on The Young and the Restless. Most fans are on board with that, he has been adrift for a while now.

But first he had to deal with the death of his mom Dina Mergeron (Marla Adams). That led to the Teardrop of Love Necklace plot which seemed to codify the fact that a love thang was on the horizon for Jackie.  But with Sally? According to our inside CBS source, yes!

The Young And The Restless spoilers – What Happens Next In Genoa City?

There is plenty of dissent about this romance onscreen. Skyle think it is icky and Phyliss Newman (Michelle Stafford) is firing daggers with her eyeballs whenever she sees Sally. Which is sort of ironic since Sally has been compared in many ways to Phyllis and not just because of their flaming red hair.

Sally is an upstart who wants much more than she has right now. Phyllis was once like that, and both have extremely shady pasts. Add to the fact that Phyllis is Summer’s mom and Jack is her ex and her tigress instincts are spilling out all over.

Will Jally be a thing? Tell us what you think Y&R fans. Do you want to see Jack and Sally sail off into the sunset or would you rather see each of these characters with someone else?