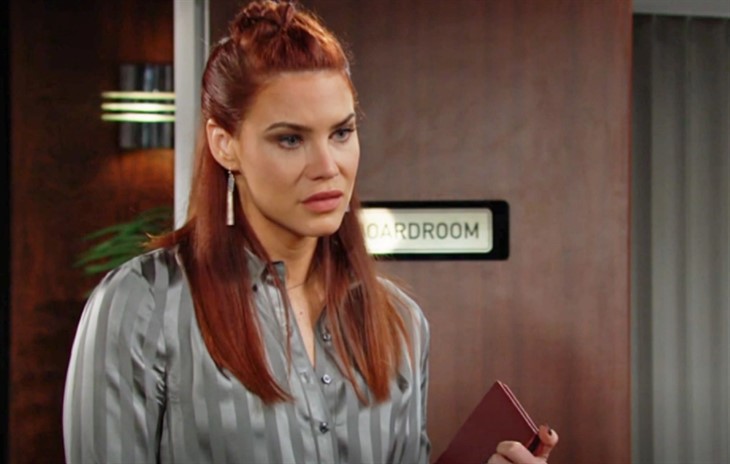 Viewers of The Young and The Restless will recall that Sally recently requested a meeting with Locke, and they met in Chancellor Park. Locke told Sally that he would need more information from her before he would agree to help her with her plot. The first thing he wanted to know was exactly who that Sally was so anxious to make leave Genoa City.

Sally told him she wanted Summer Newman, (Hunter King) Kyle Abbott’s (Michael Mealor) fiancée to leave town. Of course, Kyle Abbott is a name that Ashland Locke would certainly be interested in, since he suspected and later confirmed his wife Tara Locke (Elizabeth Leiner) had an affair with Kyle. Since then he also found out his son wasn’t his son! Sally talked Summer up, telling Locke how smart and ambitious she is, and what a bang up job she was doing running Jabot Collective. She made no bones about wanting Summer’s job, but in order to get it, Summer had to be gone! Locke admitted that he admired Sally’s drive.

He was also on target with suspecting that Sally had more personal goals in mind for wanting Summer gone. Locke assumed Sally’s personal motives were vindictive. Sally admitted they possibly were, and Locke didn’t have a problem with that. Locke said if getting Summer out of town hurt Kyle and served Sally’s purposes, that was fine by him. Sally asked him if they had the same goals, and Locke said they did. Locke then told her that he may have just the thing to help Sally achieve her goals – by offering Summer a job at an illustrious fashion house. It would definitely be a position worth Summer’s while to leave town for, but Locke had a condition. He wanted to know where his son was, and Sally gave him a lead!

What Sally doesn’t realize, and what she will likely find out in future episodes of The Young and The Restless, is that she’s playing with fire! They don’t call him the “Locke Ness Monster” for nothing! Tara Locke seems to be a fairly strong woman, but she’s scared of Ash. She has warned Kyle and others that they don’t want to get on Ashland’s bad side, because he will crush whoever opposes him! Sally was quite nervous when Dollar Bill Spencer (Don Diamont) showed up in Genoa City to seal a deal with Jabot.

The Young And The Restless (Y&R) Spoilers: Jess Walton Asking For Prayers
https://t.co/8Hp8ocxDPe

He had destroyed Sally’s great aunt Sally Spectra l’s (Darlene Conley) company, Spectra Fashions, and burned the building to the ground! That was to have been young Sally’s legacy, and not only did Dollar Bill burn it to the ground, but she was also in it at the time along with some others! Ashland Locke probably makes at least two or more of Dollar Bill with a healthy dose of the worst of Victor Newman (Eric Braeden) thrown in for good measure!

Viewers of The Young and The Restless will recall how Jack Abbott (Peter Bergman) and Kyle got on Locke’s bad side and he almost destroyed Jabot right out from under them with bad publicity and paying inspectors to fail several of their major factories’ inspections! Sally had better watch it and not get on Locke’s bad side, or she may fare worse in Genoa City than she did in Los Angeles!