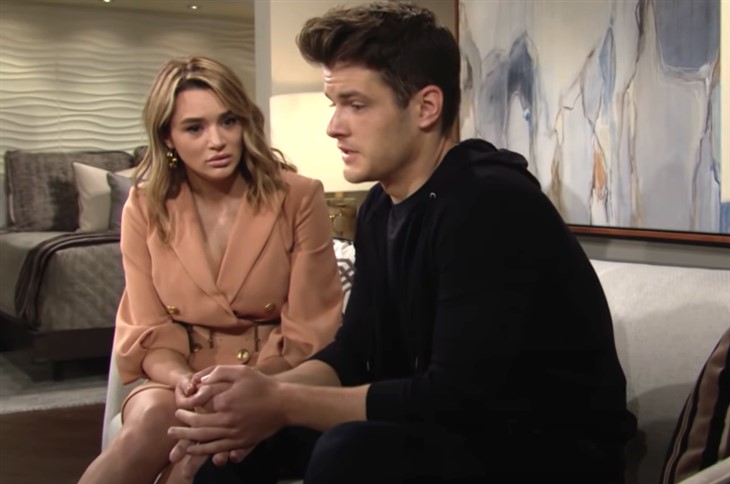 The Young and the Restless (Y&R) spoilers for Wednesday, June 2, 2021, reveal Summer struggling and Kyle reeling.

The Young And The Restless Spoilers – Paternity Non-Shocker

Now that they know for sure that Kyle (Michael Mealor) is young Harrison’s father, the Abbotts band together to protect the boy, but from whom? Jack (Peter Bergman) seems to think he needs to protect Harrison and the whole clan from Ashland (Richard Burgi), but is it Tara (Elizabeth Leiner) he really needs to worry about. After all, Ashland warned him and she does seem a bit off-kilter.

Meanwhile, Summer (Hunter King) tells her parents that dealing with Kyle now having a child who will become her step-child is not easy and she has to be mature and do it. Too bad her dad, Nick (Joshua Morrow), can’t be that much of an adult about Adam (Mark Grossman). He has grown more uncomfortable with their truce and told Phyllis he is not sure he can be the good brother that Victor (Eric Braeden) wants.

Victor is still full-speed ahead when it comes to going after Billy Boy Abbott (Jason Thompson) and Lily (Christel Khalil) professionally, and now he may have more news for Amanda (Mishael Morgan), as well. The Young and the Restless spoilers say she gets yet another shocker about her family and Victor has already provided a shocker about her father. Does he have information about her grandfather, too?

Amanda also has to deal with Imani (Leigh-Ann Rose)spending more and more time in Genoa City now that Nate has caught her eye. Amanda once had a fling with Nate (Sean Dominic). Will her sister get her seconds?

Yes, Kevin (Greg Rikaart) has been the one to do the right thing this time and tell Chloe (Elizabeth Hendrickson) to tell Rey (Jordi Vilasuso) and Michael (Christian Le Blanc) everything that happened with Chelsea, but does she have the guts to do it?

Being related to Michael has helped her in the past when she has committed crimes, but will he be able to do something for her this time? She may have been an unwitting accomplice at first, but since then she’s been covering for Chelsea (Melissa Claire Egan) and lying to Rey. Stay tuned to The Young and the Restless weekdays to see how this story plays out.

General Hospital (GH) Spoilers: Nurse Chloe And Peter May Be Dead – Will Finn Be Able To Save Chase?