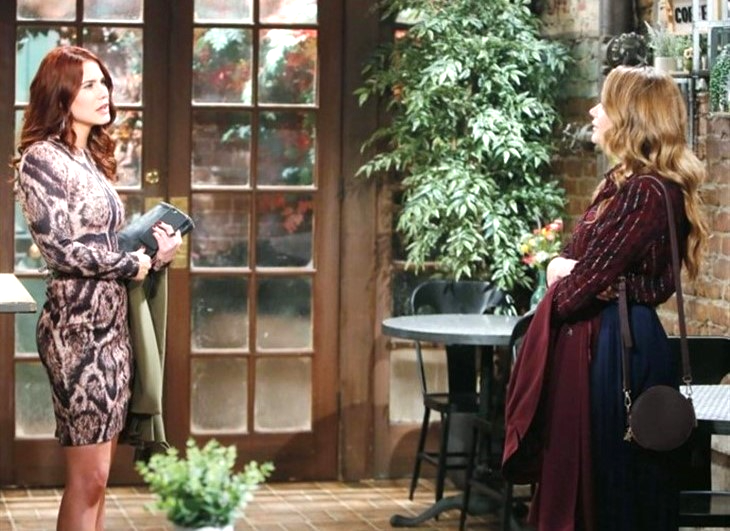 Instead, Summer believes, based partially on what Theo Vanderway (Tyler Johnson) tipped her off to, that Sally believes she deserves to have the new position at Fenmore’s. So, Summer is heading to Los Angeles, California, in order to dig into Sally’s background. Inside soap fans will be interested to see if Summer briefly crosses over to The Bold and the Beautiful as part of the hunt.

Tellingly, Hope’s photo still appears on B&B’s cast page, while her equally appealing head shot also shows on Y&R’s visual ensemble listing. So, it’s possible that Sally might not remain in Genoa City, Wisconsin, indefinitely, as she seems to think.

Young And The Restless Spoilers – Summer Newman Is Sharp

There was a time in Y&R’s history when King’s character was written softly. She was dubbed snowflake by Mariah Copeland (Camryn Grimes).

However, the writing staff used King’s most recent return to the cast, which followed her break to film the since ended nighttime comedy series, Life in Pieces, to sharpen Summer. The character became a reckless, me-first individual.

Young And The Restless Spoilers – Maturity With The Seasons

Kyle and Summer finally seem to have arrived at a point of mutual maturity. Each person fully loves the other, with their shared goal being to get married when the time is right. Rushing to the altar was wrong, as the flopped elopement plan proved.

So, fans of this again likable couple were hoping that a relative period of peace existed. No so, as firebrand Sally laid down the gauntlet, telling Summer exactly what she thought of her.

It was ironic that Sally demeaned Summer’s accomplishments because many have treated Hope’s character the same way through the years. So, she hasn’t grown, but has actually regressed.

If Summer connects with Flo Fulton (Katrina Bowden), then Sally is in trouble. As long as King’s character presents herself well, Flo and potentially Wyatt Spencer (Darin Brooks) can relay the details of Sally’s recent, or more distant criminal past.

It’s not as though Summer is likely to be handed a smoking gun that she can use to end Sally’s run in GC. But educating herself about the enemy, which Sally has revealed herself to be, is needed. And, Kyle can also be brought up to speed so that he’s never swayed, like Jack Abbott (Peter Bergman) currently seems to be.