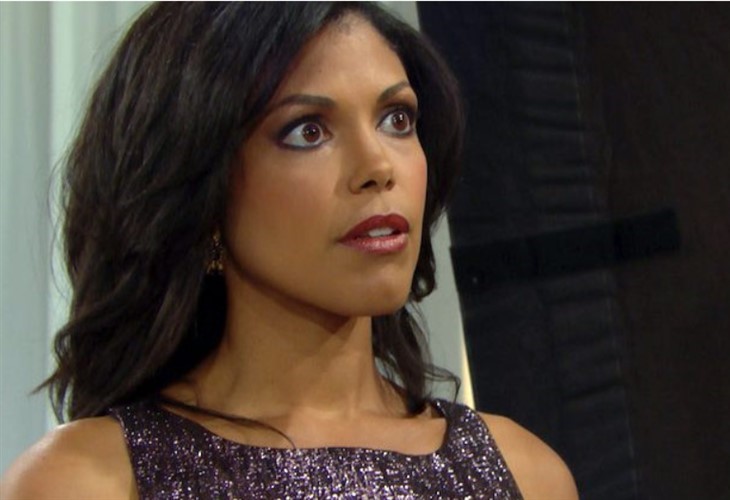 The Young and the Restless (Y&R) spoilers reveal that show execs are so impressed with a temporary recast that they are considering making room for the actress once the temp gig is over. Our inside source at CBS is hearing that TPTB could be on the verge of making Karla Mosley (temporarily Amanda Sinclair) the show’s newest cast addition.

The Young And The Restless Spoilers – Is Maya Avant Headed To Genoa City, Wisconsin?

Mosley has been seen in the role of Amanda Sinclair in recent days. She was given the job after the actress who portrays Amanda, Mishael Morgan, suffered an eye injury. The injury required medical care and during that time Morgan was unable to work.

She is expected back soon and with her arrival the departure of Mosley is inevitable. Or is it?

According to our CBS insider, execs are very impressed with Mosley’s work. She has filled Morgan’s role with ease and confidence and that has not escaped their view.

There is also the fact that Mosley is a part of the CBS soap family. She played Maya Avant on Y&R’s sister soap The Bold and The Beautiful where she was a fan fave.

Maya was married to Rick Forrester (Jacob Young) but their marriage broke up after both characters left the show in 2019. Maya debuted in 2013 when she came to LA looking for her daughter who was put up for adoption by Dayzee Forrester (Kristolyn Lloyd).

Maya eventually discovered the sad truth that her child died and eventually she fell for fashion executive Rick Forrester. Their romance was bumpy and at one point Maya had a fling with hunky Forrester lawyer Carter Walton (Lawrence Saint-Victor).

Maya became a supermodel and her engagement to Carter failed when he realized he was her second choice. Eventually, Rick and Maya married.

The Young And The Restless Spoilers: DNA Test Determines If Kyle Is Harrison’s Father https://t.co/zwkulLSS80 pic.twitter.com/yhfuwP467g

In March 2015, it was revealed that Maya was actually born Myron and is transgender. Mosley said of the plot point, “My first reaction was surprising… 10 or 20 years ago, this is not a story we would be telling, and not in a way that’s truthful and not sensational. It’s not just Maya’s story,” she said.

What do you think fans, will Mosely be hired on at Y&R, and if so do you want to see her as Maya or an entirely different character?