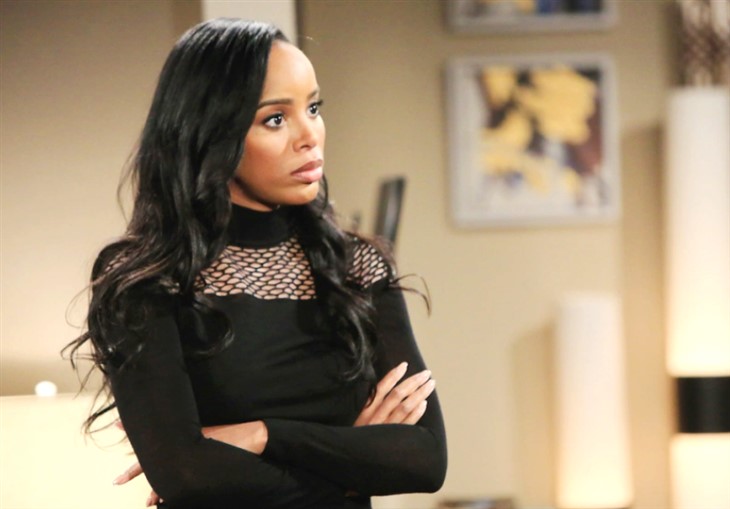 The Young and the Restless (Y&R) spoilers that Amanda Sinclair’s (Mishael Morgan) half-sister Imani Benedict (Leigh-Ann Rose) is coming back to the fictional burg of Genoa City, Wisconsin on April 29!

Why is the crab apple returning when she filed a restraining order against Amanda? Could it have anything to do with her own self-interests?

We found out last year who Amanda really is. She is the twin of the late Hilary Curtis and was gobsmacked to finally meet her biological mother Naya Benedict (Ptosha Storey).

After meeting her she found out the story and circumstances of her birth and subsequent adoption. Naya had become pregnant with twins as a young woman and her religious parents forced her to give up her babies. Naya gave Hilary to her cousin Rose who raised Hilary and Amanda was placed in foster care. None of this sat well with Amanda but she was willing to forgive and forget. But her mom and sister weren’t so keen on having anything to do with her.

Y&R Spoilers – What Happens Next In Genoa City?

That was until Naya wanted something from her daughter. She came back to Genoa City with a sob story of how much she needs Amanda’s help regarding her father, Amanda’s biological grandfather, Sutton Ames (Jack Landron).

How convenient is it plotwise that Sutton was accused of killing Amanda’s father, Richard Nealon thirty years ago? Very convenient.

Setting disbelief aside, fans are about to see Amanda fight for Sutton despite his rejecting her. She caves when Naya asks her to be a part of his legal team and in turn be accepted by her bio fam.

The Young And The Restless Spoilers – How Convenient Is It That Naya Can Call On Amanda Sinclair As A Lawyer?

Explosive show spoilers reveal that Victor doesn’t take too kindly to Amanda snooping around and tells her to mind her own business. Apparently he was involved in two death cover ups around the same time? Why not make it 10 or 14? While the storyline may play out to be a sensationally original one, right now it smells like old news, akin to the recently wrapped up ‘Adam Newman (Mark Grossman) killed a man and Victor covered it up plot.’ Time will tell.