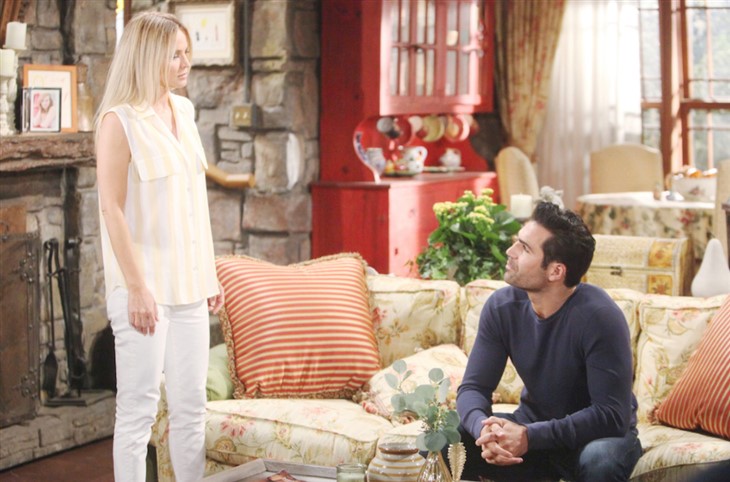 Viewers of The Young and The Restless will agree that anytime Rey Rosales has a problem with Sharon Rosales, it is always accusations over her and Adam Newman (Mark Grossman). It’s always Adam, Adam, Adam! Sharon does not see that as long as she is not having an affair with Adam, which she is not, that her having reached out to help him, or his reaching out for her help, has been such a huge problem. Of course, viewers of The Young and The Restless who have studied any psychology at all can see that Sharon and Adam are in a codependent circle – she’s a fixer, and he’s always in need of being fixed!

Longtime viewers of The Young and The Restless can see why Rey sees a pattern with Sharon going to Adam and Adam to her, “Shadam” have been together as a couple and split up and back and forth several times. The last time Rey broke up with Sharon and moved out it was over Adam as well, when she was trying to help him get custody of his son Christian Newman (Alex Wilson) back from Nick Newman (Joshua Morrow). Ultimately, Christian stayed with Nick. Now, Adam has been on the run after Rey was poisoned with thallium, found in his personal care items thanks to Chelsea Lawson (Melissa Claire Egan) who has framed Adam. The only problem is, Rey doesn’t believe Adam has been framed, and as viewers of The Young and The Restless will recall, Rey and Sharon had a very big argument about it!

Y&R Spoilers – Rey Rosales Questioned Chelsea Lawson But She Kept Up Her Fakery And Fooled Even Rey, Bringing An Ultimatum To Sharon Rosales

Viewers of The Young and The Restless will recall that Rey had questioned Chelsea, but she kept up her fakery and fooled even Rey! Sharon, after much arguing with Rey, finally gave Rey the address of the lake house where Adam had been hiding out, only to find that Adam had already vacated it! Rey very likely will assume that Sharon called Adam to tell him that Rey was on his way, which Rey will consider aiding and abetting of a fugitive. However, since Adam has not been formally accused in court and charged with the crime of attempted murder by poison, Adam is not technically a fugitive, only a person of interest.

The Young And The Restless (Y&R) Spoilers: Victor Hides From The Past, Ashland Schemes For The Futurehttps://t.co/ySDLU4fDmA

Viewers of The Young and The Restless familiar with crime dramas or police procedures will know that Adam can only be brought in for questioning. With Adam having vacated the lake house, Rey will still be on the hunt for him, as well as other law enforcement since he put out an APB (All Points Bulletin) for Adam. But when Rey returns home there will be another fierce argument between Rey and Sharon. Rey is likely to give her an ultimatum that she must now choose between Adam and him, although it is possible he may include a threat of charging her with aiding and abetting even though it wouldn’t stand up in court! As viewers of The Young and The Restless know, Sharon will not take that ultimatum well!