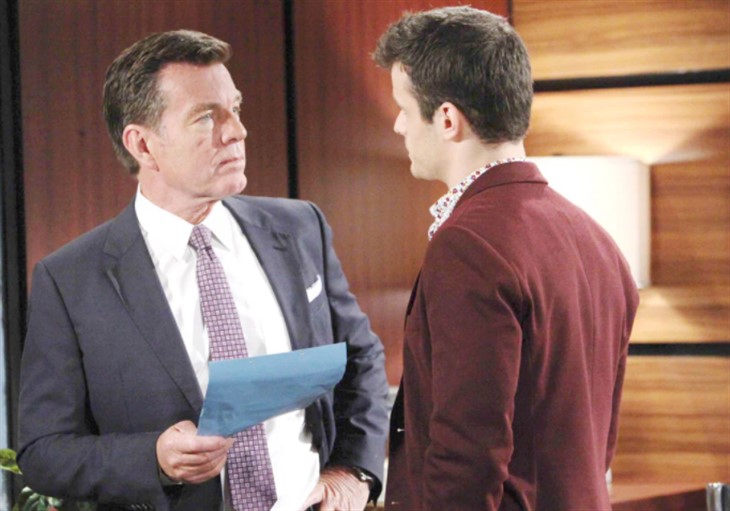 The Young and the Restless spoilers indicate that Sally Spectra (Courtney Hope) will win the affections of one of the Abbott men.  After arriving in Genoa City, seeking a fresh start, Sally has found herself becoming chummy with the Abbott family.  With a job at Jabot, Sally is becoming close to Jack Abbott (Peter Bergman) and his son Kyle Abbott (Michael Mealor).

With Sally being friendly with both men, it’s only a matter of time before romance blooms between her and one of the guys.  So which Abbott man will Sally sink her hooks into?

Already Sally is causing problems amidst her arrival in town.  After losing her business along with her boyfriend, Sally came to Genoa City ready for a new life.  However, it appears the redhead is back to her scheming ways.

Sally wants to work her way to the top at Jabot and what better way then working up a friendship with her bosses.  Sally and Kyle have already hit it off much to the chagrin of Kyle’s girlfriend Summer Newman (Hunter King).

Young and the Restless spoilers tease Summer is jealous of Kyle’s newfound friendship with Sally, and she has her suspicions when it comes to the fashion designer.

Summer’s keeping a close eye on Sally, and according to rumors may even dig into Miss Spectra’s past, which will result in a Y&R and B&B crossover.  Yet, will Summer’s plan to get rid of Sally backfire, leading to trouble between her and Kyle.

Although Kyle seems the more likely candidate for Sally’s love interest, it may be his dad who sweeps Miss Spectra off her feet.

Jack’s been single for a while on The Young and the Restless. His last relationship was with Kerry Johnson (Alice Hunter), a woman much younger than him.  Jack and Kerry’s romance ended when it was discovered she was really a spy working for his sister Ashley Abbott (Eileen Davidson).

Since then Jack’s storylines has focused more on business at Jabot and the death of his mother Dina Mergeron (Marla Adams).  The Young and the Restless fans feel it’s time Jack finds love again, and based on recent scenes, many believe Sally could be his new lady.

The Young And The Restless Comings And Goings: Visitors Came and Went & A New Paramedic #yr #YoungandRestlesshttps://t.co/5U3mAQXvXV

The Young And The Restless Spoilers – Kyle Abbott Or Jack Abbott? Fans Weigh In

The show seems to be pushing for a Sally romance with either Kyle or Jack, and fans are already weighing in with their opinions.  A majority of fans feel uncomfortable with a Jack and Sally romance due to the age difference.  Many feel that Jack is more like a father figure to Sally, and Jack should be paired with a woman his own age.

As for Kyle, some fans are open to the possibility of a romance with Sally. However, Skyle fans aren’t too thrilled with Sally breaking up their favorite couple.