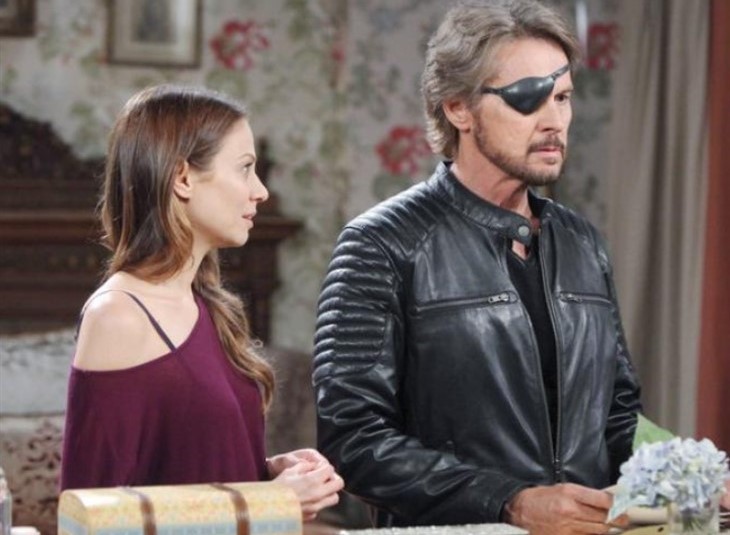 Days of Our Lives (DOOL) spoilers reveal that Ava Vitali (Tamara Braun) has always tried making Steve “Patch” Johnson (Stephen Nichols) her own. There was even a time when she forced him to be with her to save Kayla Brady (Mary Beth Evans). Well, it seems she might have a new love interest. Rafe Hernandez (Galen Gering) will be her new hero and perhaps her new obsession.

Days Of Our Lives Spoilers- Obsession With Steve Johnson

DOOL spoilers reveal that Ava has tried to make Steve her own for years. Even when he was in love with and married to Kayla, Ava didn’t give up. At one point, she had Kayla kidnapped and held hostage. Steve was forced to be intimate with her in order to save Kayla’s life. So, it’s perfectly understandable why Kayla tried to strangle Ava to death when she showed up alive. Not to mention that Steve and Kayla’s son, Joey Johnson (James Lastovic) spent four years in prison for killing a not-so-dead Ava.

Right now, we are seeing Ava be terrorized and threatened by her son, Charlie Dale (Mike C. Manning). He is holding her hostage and spiked her soup with drugs that will make her hallucinate. He has plans for his mother in order to protect his secret. He doesn’t want anyone finding out or believing Ava when she reports that Charlie is Allie Horton’s (Lindsay Arnold) real rapist.

We are going to see Ava get rescued when Rafe enters Charlie’s apartment and finds the missing villain bound and gagged.

Days Of Our Lives Spoilers – Victimized Villain Has New Hero

Day of Our Lives spoilers reveal that Ava will be thankful to be saved from her psychotic son. In fact, DaysCafe teases that Rafe is Ava’s hero! We have to consider the warped mental state of the woman. There is a pretty good chance that she might confuse her gratitude for love. Could she actually develop a huge crush on the police commissioner? That certainly would be an odd pairing… but he won’t be interested.

We already know from soap couple promotional photos that Rafe and Nicole Walker Brady (Arianne Zucker) end up together. We’re still not sure what exactly happens to Eric Brady (Greg Vaughan), but we will find out soon enough. It is also confirmed that Nicole tries to help Ava after she’s rescued. Apparently, Charlie is still a threat to her. So much that Nicole begs Rafe to put Ava in protective custody.

Nicole and Ava used to be best friends and it’s implied they could form that kind of connection again. So, if the mobster daughter becomes convinced Rafe is her new soulmate, how will it affect that relationship? Will she try to go as far with Rafe as she did with Steve? We will have to keep watching the NBC soap to find out.