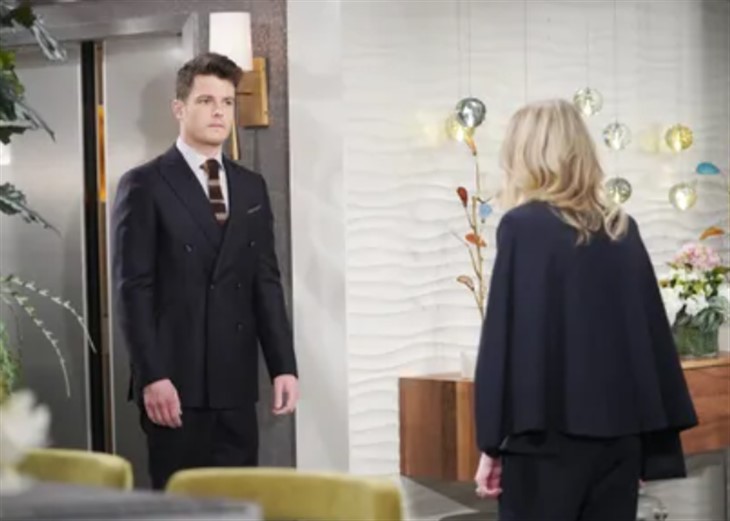 The Young and the Restless (Y&R) spoilers document that Kyle Abbott (Michael Mealor) has been resisting the inevitable. He wanted to believe that Ashland Locke (Richard Burgi) might never learn what happened in New York. But the Lockeness Monster directly questioned Kyle about the affair, with a skillful denial following.

However, the audience saw that Ashland later contacted one of his underlings. He requested that Jabot be checked thoroughly. As fans have come to see and Kyle came to know, rumors are now being circulated about the family cosmetics business being a bad place to work.

The Young And The Restless Spoilers – Revenge Plan Intended

Ashland pretended to believe Kyle’s story about not knowing Tara Locke (Elizabeth Leiner), which included joking about the response. But that didn’t stop Mealor’s character from thinking the storm passed.

Tara’s warning call to Kyle let him know that Ashland was acting very harshly toward her. He yelled in a manner that she’d never seen before, an obvious tell that Ashland was responding to the realized betrayal.

The revenge game Ashland is playing is no surprise, as his fierce reputation for destroying perceived enemies and those they were connected to is well known.

Kyle and Tara were wrong to do what they did. Their fear of him learning what happened is justified, as anyone would be expected to react with anger in this type of situation.

However, it’s past time for Kyle to confirm Harrison Locke’s (no actor known to be cast for this role) paternity. Tara claims he’s Kyle’s son and Ashland may suspect the same after he did the math.

Emotional feelings aside, Kyle has a right to know if he has a child. Ashland also needs to determine if the three-year-old he thought was his son has actually been a stepchild all along.

The Young And The Restless Spoilers – Skyle’s Future In Doubt?

Kyle addressed Summer Newman’s (Hunter King) feelings head-on. In response to her unsettling dream, where Kyle and Tara were together, he said that Skyle is his future.

There is no doubt that the current edition of Skyle is stronger than it’s ever been. This couple’s bond has been strengthened through the current dilemma. But the conflict hasn’t ended yet, with unknown outcomes yet to be determined.

Kyle’s plan to marry Summer may or may not be impacted by whatever happens with Ashland and the paternity confirmation. Skyle fans are hoping for a wedding and likely for her to be Harrison’s stepmom.