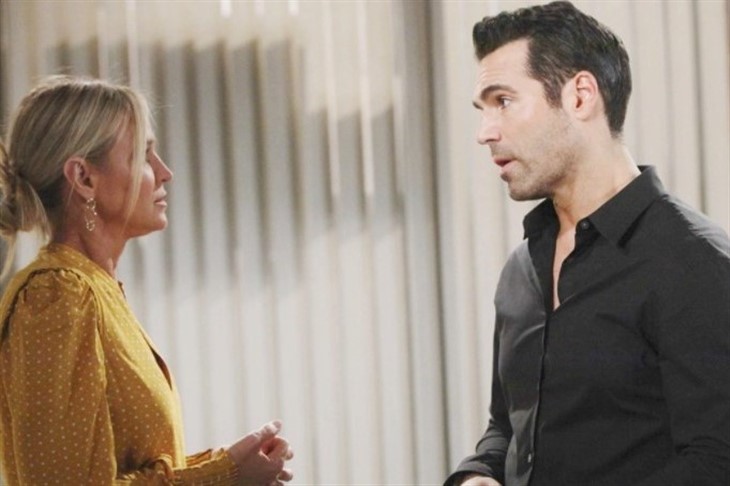 The Young and the Restless (Y&R) spoilers document that Sharon Rosales (Sharon Case) can’t truly blame her husband for how he feels. While she did tell Rey Rosales (Jordi Vilasuso) the truth about not tipping Adam Newman (Mark Grossman) off, it may be too little too late for Shey.

Rey was very leery of Sharon’s fascination with Adam long before they agreed to marry. But this month’s-long union appears to be near the end, as Rey feels that trust has been shattered.

The Young And The Restless Spoilers – Rey Rosales Too Harsh?

Y&R fans recall Sharon’s hard-fought battle with cancer. She emerged victorious in that fight, which included the firm support of Rey.

Standing just months away from that victory Sharon can be given some slack for all that she endured, right? But Rey has only mentioned her health crisis in passing, as though it happened years ago. That’s wrong.

A loving spouse wouldn’t be so insecure about an ex-husband that he would think himself into a corner. But Rey has done exactly that.

A counter must be offered regarding Rey’s behavior as any honest person, which includes Sharon, must admit. Case’s character does put Adam in a special category.

While she isn’t openly in love with him, Sharon did tell Adam in January of 2020 that he was different than any other man she ever loved. Adam took that as a cue Shadam could comeback. He then flaunted the possibility in Rey’s face on more than one occasion.

Sharon has offered what she feels are explanations about her continuing connection to Adam within the last year-plus. However, Rey and a contingent within the audience see Sharon’s explanations as excuses. It’s clear, by any reasonable standard, that she’s not over him.

The Young And The Restless Spoilers – Adam Newman Remains The Issue

Meanwhile, Chelsea Lawson (Melissa Claire Egan) has framed Adam for Rey’s attempted murder. She’s seeking a restraining order against him and made contact with Connor Newman (Judah Mackey), which indicates custody matters may also come to the fray.

The Young And The Restless (Y&R) Spoilers: Victoria Wins In Business And In Love? – Billy Can’t Escape The Past https://t.co/38q5bV52YK pic.twitter.com/a1xnHqNrwB

Chadam’s current drama can impact Shadam if Rey successfully catches the suspected criminal. That should inevitably lead to Chelsea’s guilt being in play. But Adam told Victor Newman (Eric Braeden) that he doesn’t want her to suffer further.

Tension for Shey and Chadam could lead to Sharon and Adam being single or at least separated from their supposed loves. That implies a Shadam revival is increasingly possible.