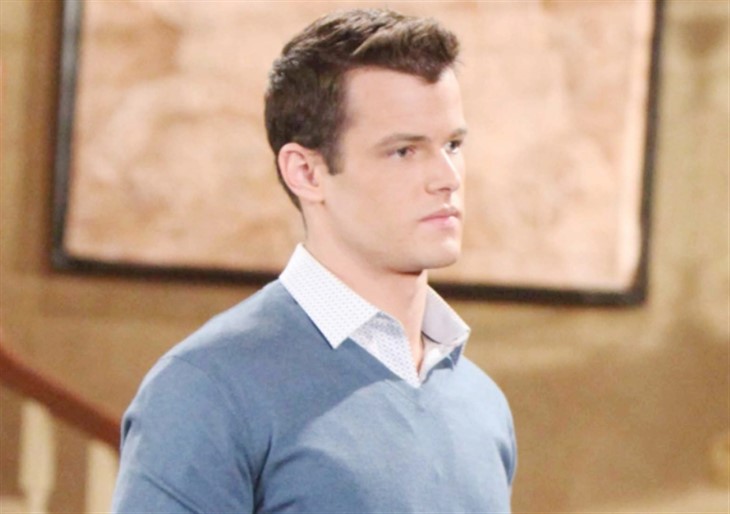 The Young and the Restless (Y&R) spoilers document that in Genoa City, Wisconsin Kyle Abbott (Michael Mealor) has reached a turning point. What he’s feared is happening. Ashland Locke (Richard Burgi) is about to confirm what was suspected.

The reveal that Kyle and Tara Locke (Elizabeth Leiner) didn’t want was tipped off by their interactions at Society and the Grand Phoenix Hotel. So, they only have themselves to blame, which is fitting considering they should have never been together in New York to begin with.

The Young And The Restless Spoilers – Theo Vanderway Steps In Again

Kyle thought his cousin was out of his hair, but he wasn’t. As fans recall, Jack Abbott (Peter Bergman) stepped in, convincing the Abbott clan that Theo Vanderway (Tyler Johnson) deserved something from Dina Mergeron’s (Marla Adams) inheritance.

Some creative thinking provided Theo with a boutique shop in Paris, France. Theo left Genoa City, Wisconsin, as Johnson’s character moved to recurring status a handful of months ago.

But Theo suddenly returned to his adopted home so that he could lower the boom on Kyle one more time. Theo made sure Sally Spectra (Courtney Hope) knew the score too, so that she could keep the pressure applied to their mutual target.

Tara never told Kyle that she was pregnant after they stopped seeing each other. Then, when Mealor’s character recently learned about her son, Tara claimed that Kyle wasn’t Harrison Locke’s (no actor known to be cast for this role) father.

But Tara reversed herself. She did so when choosing to come to GC, in front of Ashland’s anticipated Cyaxares business deal.

Her tell to Kyle that he is Harrison’s father was sobering. However, Summer Newman (Hunter King) rightly told Kyle that he can’t take her word for it. Until this point in the plot Kyle also decided to withhold the entire Harrison storyline from his father.

Kyle is embarrassed, more than anything. His intent was to shield Summer, just as he thinks he’s been protecting Jack.

Telling his Jack about the affair with Tara is only a half-measure. As is true with Summer, offering the whole truth to his dad would be helpful. They both love Kyle and will serve as defenders if Ashland attacks, as is anticipated.

The Young And The Restless Spoilers: Nikki Newman Forced To Make A Confession #yr #youngandrestlesshttps://t.co/DBBbEzZdcS

With whatever precautions need to be taken at Jabot, what matters most is whether Kyle has a son. Jack, like Summer, will want Kyle to confirm paternity. Then everyone can deal with whatever repercussions happen.

Ashland might live up to his reputation as the Lockeness Monster or maybe he’ll surprise everyone. If Kyle proves to be the biological father and with time to realize what’s best for the boy he loves as his own, Ashland might agree or even insist that Kyle deserves his place in Harrison’s life.

General Hospital (GH) Spoilers: Sam And Britt Team Up, Can They Work Together To Clear Jason?”