The Young And The Restless (Y&R) Spoilers: Kyle Comes Clean To Dad About His Affair, But Omits One Big Thing 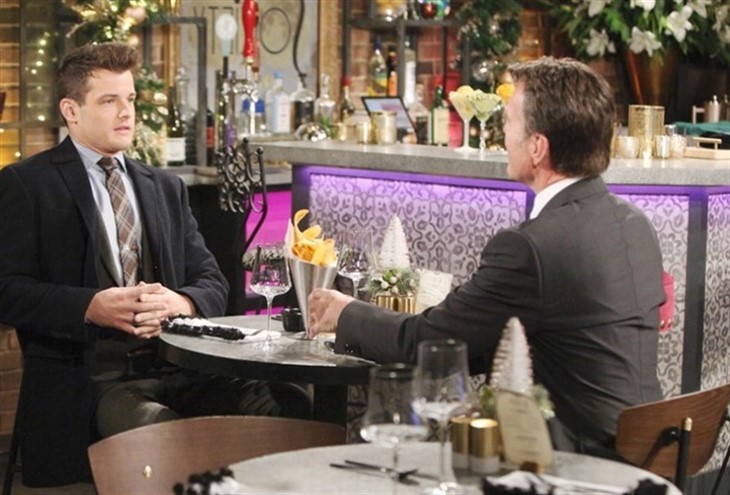 Viewers of The Young and The Restless know that Jack knows that something is bothering his son. Kyle was meaning to come clean to him the night that he found Sally Spectra (Courtney Hope) at the Abbott house, and didn’t because of lack of privacy. If it hadn’t been for Sally looking for dirt on Kyle and Summer Newman (Hunter King) to leverage them with, and Theo Vanderway (Tyler Johnson) finding some major dirt and giving it to her, Ashland Locke (Richard Burgi) wouldn’t be such a threat!

Then Kyle talked to Summer about it, and she thought definitely he should talk to his dad about the situation, although Kyle said he wasn’t sure about telling Jack about Harrison Locke (uncast child). So Kyle went to talk to Jack in the Jabot boardroom, but there was Sally, again! He started to talk to Jack and got as far as telling him there was a problem with Ashland Locke that didn’t pertain to Cyaxeres, but then he stopped him and said they needed to talk where there was more privacy. He may have seen Sally’s reflection through the glass reflecting onto something in the boardroom. Jack can tell this is something very, very serious just by the way Kyle has been acting – he is so distracted it is affecting his work! Jack promises him they will have privacy to talk about this very important matter!

Longtime viewers of The Young and The Restless will remember that Jack, too had a son he hadn’t known about that was conceived while he was in the Vietnam War. Keemo Volien Abbott (Phillip Moon) is rarely referred to anymore, but Jack found out about him when Christine and Paul Williams (Lauralee Bell, Doug Davidson) investigated a robbery at the Saigon Shack, and his Vietnamese girlfriend was shot. Jack was unaware Luan Volien (Elizabeth Sung) was even nearby, and she told Christine and Paul about Keemo. They travelled to Vietnam and brought him back to Genoa City. Jack and Luan reunited and married, only for her to die from a terminal illness. Keemo, who would be forty-six now, moved away.

If Kyle didn’t know he had an older half-brother, he will likely find out now if he does indeed bring up the subject of Harrison. Jack will likely talk it out of him, because if all that happened between Kyle and Tara Locke (Elizabeth Reiner) was an affair, why would they be so afraid of Ashland finding out? It would be a he said he said as far as whether to believe Kyle or Theo, and why would Theo bring it up now four years later if he had known then if there wasn’t more to the story? If Jack does dig the truth about Harrison out of Kyle, he will bring up the subject of paternity tests but only if Ashland does want to know if Harrison is Kyle’s! Kyle will tell him Tara thinks he is but Jack will remind him science is truth, and if no paternity test is pursued on Ashland’s part, then he is just blowing smoke!

Days Of Our Lives (DOOL) Spoilers: Xander Ends Up In A New Woman’s Bed, Who Is She?